Penguins Are Colder Than the Air Around Them | The Mary Sue

Cold as Ice and Then Some: Penguins Are Colder Than the Air Around Them 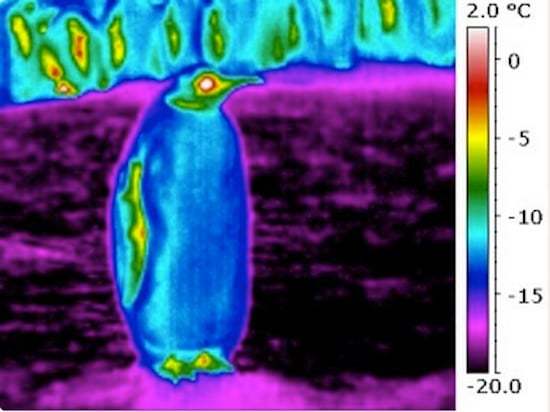 A team of European penguin researchers found some unexpected results when they turned infrared heat sensing cameras on a group of emperor penguins they were studying. The outer layer of the birds feathers, they found, was actually colder than the surrounding air. While it goes against common sense, keeping their outermost layers ice-cold may actually help penguins stay warm deeper inside — where it counts.

Researchers from the Universite de Strasbourg in France and other institutions snapped thermal pictures of hundreds of penguins who had left the protection of the giant huddles that keep them warm, presumably because they found themselves seated next to someone who wouldn’t shut up about their startup. When they abandoned the huddles, researchers were surprised to find the penguins temperature dropped to below that of the surrounding air — which, when you’re in Antarctica, is already very, very low indeed.

The outer layers of the penguins feathers generally registered four to six degress Celsius lower than the air around them. Since their outer layer is colder than the air around them courtesy of what researchers described as “extreme radiative cooling,” the birds can actually draw a little bit of warmth from the sub-zero environment. It’s not much warmth, say researchers, and much of it is probably lost when it passes through the skin, which is not a great conductor of heat. When you’re a penguin, though, every little bit of heat counts.

The team also found that some parts of the penguin’s body did manage to remain warm. That includes their eyes, which are surrounded by specialized rings of blood vessels that keep them warm — and result in the bird’s eyes glowing bright red in infrared photos, making it look like some strange, squat, Technicolor demon.