One Day IBM Watson Might Be Able To Treat Your Cancer 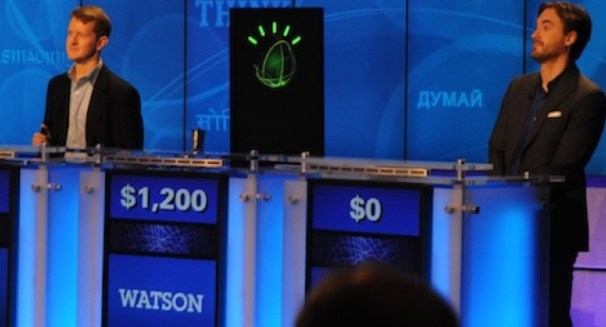 Today IBM announced a new program they’re working on that will use Watson, their now infamous Jeopardy-playing supercomputer, to treat cancer patients by analyzing data from their genes. Yeah, let’s see how you like it when robots start doing your jobs better than you, oncologists!

Robert Darnell, CEO of the New York Genome Center, stated in a press conference that they’ll be working in tandem with IBM on this project, which he calls “not purely clinical and not purely research.” Watson will be given DNA, RNA, and genome sequencing data from both the healthy and tumorous cell samples of about 20 to 25 glioblastoma patients to see if he’s able to offer any new insights.

Glioblastoma — which is a fancy medical term for “horrifying brain cancer” — is one of the worst possible cancers you can get, and which kills those afflicted about two years after they’re diagnosed. Usually you need highly trained geneticists and doctors to come up with a customized gene-specific regimen for each patient, but since Watson is very good at being better than humans, IBM believes he’ll be up to the challenge of aiding clinicians to design new treatments.

But how is Watson going to figure out what is and isn’t relevant when parsing all of this data? Because, according to Ajay Royyuru at IBM, they’ve already given Watson large amounts of information of biochemical pathway files from the National Institutes of Health, as well as text from the NIH’s PubMed database. Over time, Watson will “develop its own sense of what sources it looks at are consistently reliable,” says Ars Technica. Sorry, what? I mean, I know that’s how humans do it too — read a bunch of information and use reasoning to determine what’s reliable and what isn’t — but it usually takes us a couple of years, not counting the thousands of  worth of evolution we went through. He just knows all this stuff about medicine now?

The pool of samples Watson is working with this time around is admittedly pretty small, so we won’t know how effective Watson’s suggestions will be from the outset. But this could eventually prove to be an incredibly powerful tool for the advancement of medicine. You know, if we can all come to terms with the fact that Watson’s just going to be better than us at everything. Except moving and breathing and stuff! We’ve got him beat there. Yaaay.