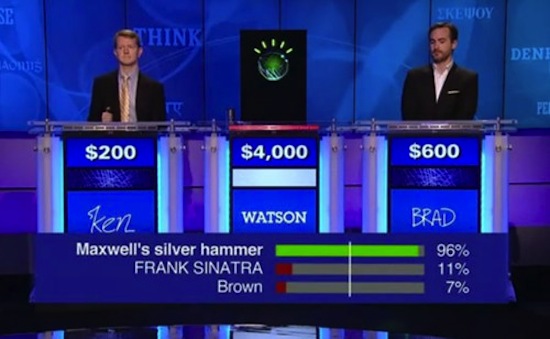 IBM’s Watson supercomputer is a pretty smart machine, already capable of trouncing our finest humans in trivia contests. There’s always room for improvement, though, and in a move certain to leave Peter Thiel like, SOOOOO pissed, the team developing Watson is sending the computer to college, where it will bone up on coursework in English and math. Pretty soon, not only will Watson be better at trivia than you, it will also be able to trounce you in beer pong, meaning it’s officially time for us to just pack it in as a species, folks. The machines have already won.

While the original Watson will be staying put at the IBM research center it calls home, the hardware to run the program is being installed at the Rensselaer Polytechnic Institute in upstate New York, where researchers and grad students will be spend the next three years teaching Watson all they can while also hoping to learn more about how the software learns and make it more effective.

IBM is hoping the trip will improve Watson’s cognitive abilities and make the software better at processing and making sense of a flood of data and images without much in the way of context, which… yeah, pretty much sounds like college. No doubt Watson’s cognitive abilities will also be improved by traditional college activities like keg-stands and explaining how Wittgenstein will, like, totally change the way you see your life, man.

No word on what Watson’s accommodations will be like, but unless every movie we’ve ever seen about college has misled us, Watson will be rooming with the not-too-bright captain of the football team, and both man and machine will realize they have a lot to learn from school — and from one another, as Watson helps football guy keep his grades up and football guy gets the bookish Watson laid in the most awkward possible way. We can’t wait.

(via Tech2, image courtesy of Jeopardy)