Faster Than A Speeding Bullet: Elon Musk Reveals the Hyperloop

Elon Musk worked all night on this? What a procrastinator. 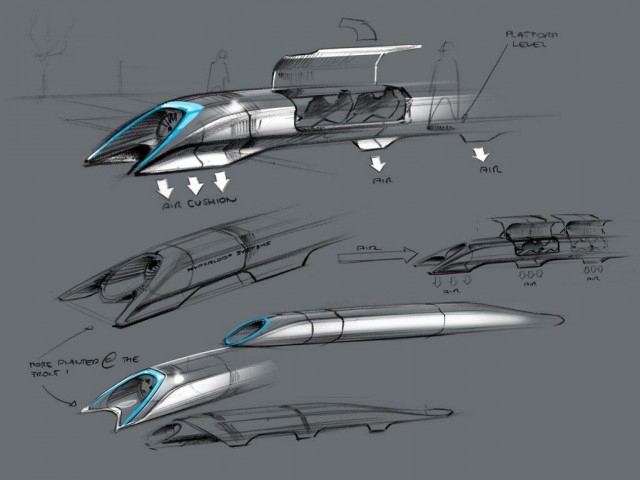 Well, it’s here. So here’s what’s new with Elon Musk’s Hyperloop scheme for building a high-speed maglev transit system, which he calls “a new mode of transport – a fifth mode after planes, trains, cars, and boats.”

In his blog post revealing the Hyperloop, Musk was pretty harsh on California’s planned new high-speed rail, calling it a “bullet train that is both one of the most expensive per mile and one of the slowest in the world,” and then he admitted he was being nice about hedging that statement with “one of”.

If we are to make a massive investment in a new transportation system, then the return should by rights be equally massive.

He pointed out that compared to the alternatives, a new mode of transportation should be:

He said the Hyperloop is even better than supersonic jets when it comes to the situation of “high traffic city pairs that are less than about 1500 km or 900 miles apart” such as Los Angeles and San Francisco. It will take passengers in capsules seating 28 from one city to the other in 35 minutes, with capsules leaving every 30 seconds.

His full plan with all the technical details has been uploaded as a PDF. He explains how solar panels along the top of the tube will power the Hyperloop with energy to spare, and outlines expansion joints for earthquake stability. It will also incorporate a mechanism for banking the capsules around curves to ease passenger stress while going 300 mph, though it will try to follow as straight a path as possible along existing highways. There’s a map on Page 40 of the document that shows the planned route, and there’s really only one sharp curve, due east of San Francisco, that might make passengers wince.

Most impressively, he one-ups the train on cost to an incredible degree. Musk says it will cost less than $6 billion, and will pay for its own construction in 20 years if you charge only $20 for a ticket. A version that could carry passengers, vehicles, and freight would cost 25% more, but that would still be 11% less than the proposed high-speed rail. 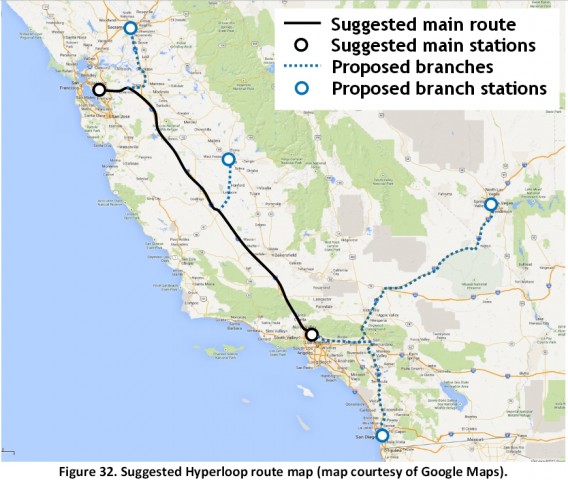 If you can’t get enough Musk, he’s doing a press call that started at 5, which The Verge liveblogged, and Business Week has an interview with him.

As we said before, this is being made open source for everyone to see and use. Musk isn’t able to build the Hyperloop on his own because he’s too busy, but he says he’ll offer assistance to whoever does attempt it. It will be pretty embarrassing for California to go forward with its high-speed rail when a faster and cheaper alternative is floating (literally floating on magnetic rails) out there.