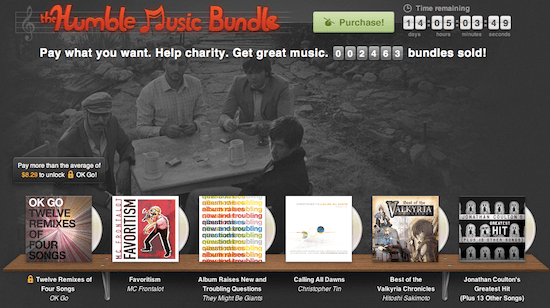 Due to the frequency of the various indie game bundles, as well as the recent 2012 Steam Summer Sale, you probably already own every single above average indie game on the market. Perhaps this is why Humble Bundle’s new bundle doesn’t contain indie games, but instead offers up a variety of geek-centric music.

At the time of writing, the current average bundle price is $8.29, which unlocks the OK Go album, Twelve Remixes of Four Songs, which includes, as the title plainly states, twelve remixes of four songs from their most recent album, Of the Blue Color of the Sky. Paying any price, as the Humble Bundle is famed for allowing, will net you the MC Frontalot album Favoritism, the They Might Be Giants album Album Raises New and Troubling Questions, the Christopher Tin album Calling All Dawns, Jonathan Coulton’s Greatest Hit Plus Thirteen Other Songs, and a best of soundtrack to the Valkyrie Chronicles series. Here’s a trailer for the bundle:

It’s interesting to see Humble Bundle branch off entirely from gaming media, but this could possibly lead to some awesome endeavors. Who wouldn’t want a DRM-free pay-what-you-want movie, eBook, or television bundle? Here’s hoping.