Humble Indie Bundle 5 Is One of the Best 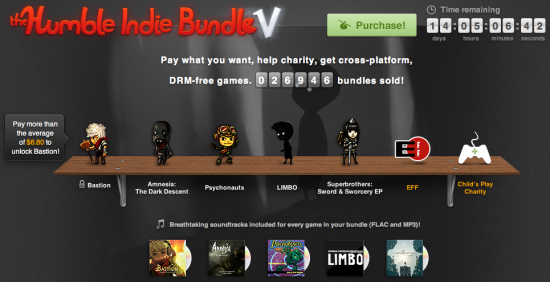 In what has become routine, the new Humble Indie Bundle is out, officially number five (even though we’ve had a few non-numbered bundles in between), and it’s quite possibly the best one yet. For the low, low price of whatever you want, you’ll nab Limbo, the computer version (as opposed to the original mobile version) of Superbrothers: Sword & Sworcery EP, Amnesia: The Dark Descent, and pinnacle of gaming and writing achievement Psychonauts. If you pay above the current bundle average price, which is rarely ever at double digits, you’ll net yourself Bastion. As always, each game included is free of evil, evil DRM, and is available for the Big Three of operating systems, Windows, OS X, and Linux. As another bonus, each game in this bundle includes its own soundtrack. Check out the trailer for the bundle after the break.