Hubble Discovers Evidence of Planet Forming 7.5 Billion Miles Away From Its Own Star

So it's farther than Pluto is from our Sun, and also more of a planet than Pluto is. Double points, new planet! 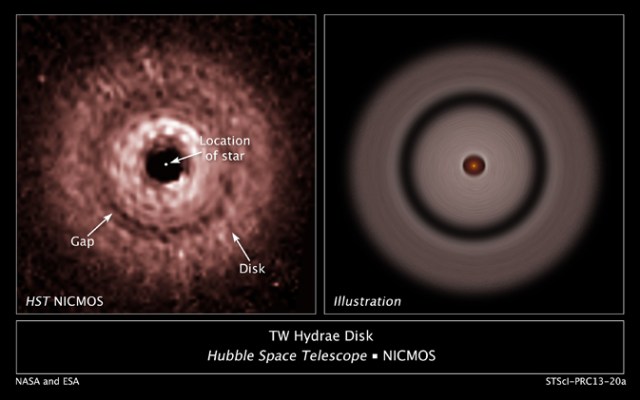 Big Bang aside, most of us non-scientists tend to not to think for very long about how exactly it is that planets are formed nowadays. Well, I certainly don’t, at least, because most of the time I’m too busy deciding what food I want to eat at any given moment. But thank God for the Hubble Telescope, through which astronomers have found compelling evidence of a planet forming billions of miles away from its star. Even cooler, this might serve to completely change all of the current theories about planet reformation.

While observing the red dwarf star TW Hydrae, the research team at Space Telescope Science Institute in Baltimore, Maryland, found a protoplanetary disk of dust and gas whirling around in orbit. Within that disk they discovered a small gap, which they believe to be the location of a growing planet that’s sweeping in all the nearby dust with its own gravitational pull.

Hydrae is located in the constellation Hydra, which is named after the mythological sea serpent, and can be found approximately 175 million light-years away from the Earth. It’s a popular target for astronomers due to its orange-red color, and is similar in mass to our sun despite only being 5 to 10 million years old — that’s basically nothing in space time.

It was previously thought that planets took tens of millions of years to form, so the fact that one is growing around such a young star challenges that theory. “If we can actually confirm that there’s a planet there, we can connect its characteristics to measurements of the gap properties, said John Debes, who leads the Baltimore research team. “That might add to planet formation theories as to how you can actually form a planet very far out.”

This new planet is estimated to be about 6 to 28 times larger than Earth, which actually makes it pretty small as well, and has a slow-moving orbit due to its massive distance from TW Hydrae. If it were a part of our solar system, it would be twice as far away from the Sun as Pluto is.

Now all that’s left to do is give the budding planet a cool mythological name. Personally I think they go with Khione if they haven’t used that already, because she’s the Greek goddess of snow and you just know that planet has got to be pretty cold that far away from its heat source.