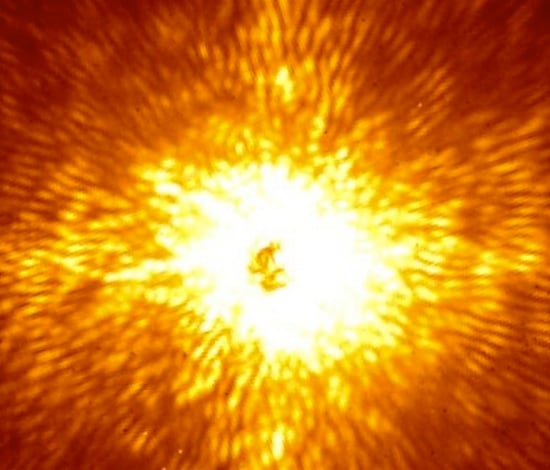 A new imaging system has allowed a team of astronomers to reveal new details about the four planets orbiting a nearby star, proving them to be among the strangest celestial bodies on record. Each one has about ten times the mass of the planet Jupiter, and rather than the blend of methane and ammonia one would expect in their atmospheres, the giant planets have one or the other instead.

The new planets were discovered with the assistance of the ominously named Project 1640. That’s not, as you might fairly suspect, a super soldier program, but a new imaging technique that lets astronomers cut down on the glare from distant stars enough to more accurately pick out the signature signs of planets orbiting them. The first results from the new system have been accepted for publication in the Astrophysical Journal. While they’re about the same size — ginormous is the technical term — the four planets are otherwise dissimilar, boasting different spectra of light that indicate each one has a different atmosphere.

Astronomer Ben Oppenheimer of the American Natural History Museum, who led the study, had the following to say about the difficulty of separating the spectra of these individual planets from the background of the star they orbit:

It’s like taking a single picture of the Empire State Building from an airplane that reveals the height of the building but also a bump on the sidewalk next to it that is as high as a couple of bacteria.

In that case, that’s quite a camerayou’ve got there, Dr. Oppenheimer. The problem is, now all we want to see you do is take it to the Empire State Building and take exactly that picture.