Dear Bananaman, Here’s How Tubs of Fun Works and Why You Didn’t Win 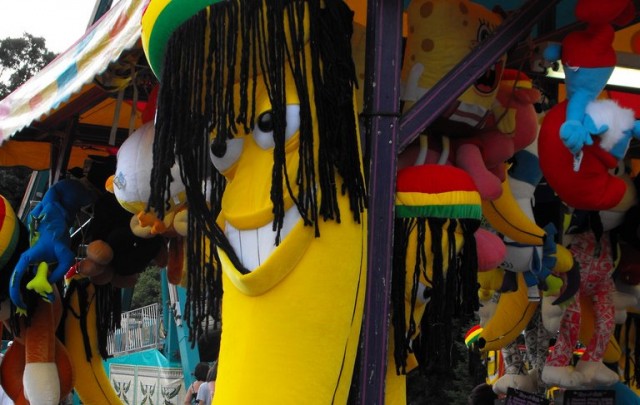 By now everyone should be familiar with the tragic tale of Henry Gribbohm who lost his $2,600 life savings trying to win an Xbox Kinect playing the carnival game Tubs of Fun. A lot of people could be wondering how Gribbohm lost so much money. The answer is simple and two-fold: 1) Gribbohm clearly doesn’t know when to quit, and 2) the game is rigged. Here’s how.

Gribbohm is probably pretty strapped for cash right now, so we’d like to help him out but we are but humble geeks. We can’t offer Gribbohm money, but what we can offer is an explanation as to why he kept losing. Bill L. Howard, the author of Carnival Fraud 101, explains how Tubs of Fun is rigged in an article on the AARP website:

From inside the booth, the carny tosses a softball and from his vantage point, it stays inside the tub. Then he gives you the second softball for a practice throw — and it stays in for a win. Why?

The carny’s first ball remains inside the tub to deaden it and prevent your toss from bouncing out. But once you hand over your money, he removes both balls and hands them to you. Without a deadening ball, guess what? Your first toss bounces out.

You might as well throw your second ball across the midway because no way it will stay inside the tub, either.

We’ll even go one further and steer you towards a great Art of Manliness article about how to actually win a few different carnival games. The information might not net anyone an Xbox, but at the very least it should keep folks like Gribbohm from dropping $2,600 on an unwinnable game.

While many of us are willing to stand by and let Gribbohm learn his lesson the hard way, CollegeHumor is taking pity on the poor guy. If the posted video below gets 26,000 likes on Facebook, they’re going to offer Gribbohm $2,600 for the banana, but they’re not stopping there. If the post gets 30,000 likes, they’re also going to buy him that Xbox Kinect he was trying so hard for.

(via CollegeHumor, AARP, and Art of Manliness, image via Tabbymom Jen)