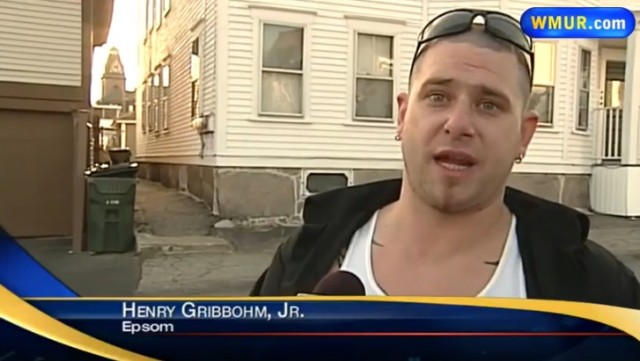 Ladies and gentlemen, please join me in welcoming New Hampshire’s own Mr. Henry Gribbohm, Jr., to the dictionary. Not as a definition, per se, but as a note perfect illustration. If there is any justice, Mr. Gribbohm’s portrait will forever appear next to the definition of the word “rube.” See also: Mark, pigeon, dupe, and all-day sucker. Because anyone can lose a ten spot trying to knock over milk bottles or ring the bell to win a prize for your sweetie. Hell, it’s half the fun of going to the fair.

But it takes a very special sort of mark — a once-in-a-lifetime pigeon — to lose their entire life savings on a carnival game. And 30-year-old Henry Gribbohm is exactly that sort of mark, losing $2,600 playing the ball toss game Tubs of Fun at a New England carnival and putting that coveted World’s Biggest Rube trophy pretty much out of reach for the rest of humanity.

Let us be perfectly clear on one point: If you lose $2,600 on a carnival ball toss game, you thoroughly deserve to lose that $2,600. No one in the history of currency has deserved to lose their money more than someone who loses their money playing carnival games, because carnival games are rigged as hell and everyone on the planet knows it. Oh, the carny told you you were going to get all your money back? Now…why would you believe that, again?

And lets keep in mind, Mr. Gribbohm didn’t lose $2,600 in one fell swoop. Not even in one go. No, Mr. Gribbohm, in a display of poor decision-making and judgment that should have granite monuments erected to it, lost $300 on the game. He then went back home, got $2,300 he had squirreled away for a rainy day like a responsible adult who has decided to have tribal tattoos instead of a bank account, went back to the carnival, and proceeded to lose every cent of it on the same ball toss game.

In the parlance of our time, Mr. Gribbohm, you are doing it wrong.

“You’re expecting the kids to win a few things, let the kids have a good time. It just didn’t turn out that way.”

A couple of points here, Mr, Gribbohm. First of all, you don’t go to the carnival expecting anyone to win anything, any more than you go to a casino expecting to make your first million. I mean, You can expect it. But you’ll be disappointed, because that’s not going to happen.

Furthermore, if you do expect to win something at a carnival, a giant stuffed banana with dreadlocks is just about your best case scenario. You don’t go trying to win the Xbox, man. They don’t even have those! The boxes are just for show. They’re filled with sawdust and the earthly remains of the former World’s Smallest Horse to keep them from blowing away.

On returning to the carnival the next day after winning nothing — because remember, this game is rigged as all hell — Mr. Gribbohm received a $600 refund, which the carnival claims is the sum that he spent on the game the day before. He also received, at no extra cost,  the best booby prize in the world, an enormous, anthropomorphic stuffed banana with dreadlocks. Presumably, it was this final, fruity insult added to his financial injury that induced Mr. Gribbohm to involve the police in the matter. He is also considering filing a lawsuit against the carnival, presumably under the cherished legal tradition of shenanigans.

Personally, in this  situation, I would be happy to see the $600, take the banana as a reminder of what not to do, and be glad that I got out of the scenario without being subjected to some sort of gypsy curse. That, however, would require decision-making skills well above the bar that our good Henry has set for himself in this story up to this point. Thus: lawsuit.

Honestly, though, we can’t wait to see how that case turns out, as it means “a handshake deal with a carnival barker” will finally be put to the test in a court of law. We don’t like its chances of being viewed as a legally binding obligation.