I Want to Go to There: Neverwinter Video Game to Include Giant Volcano Zone 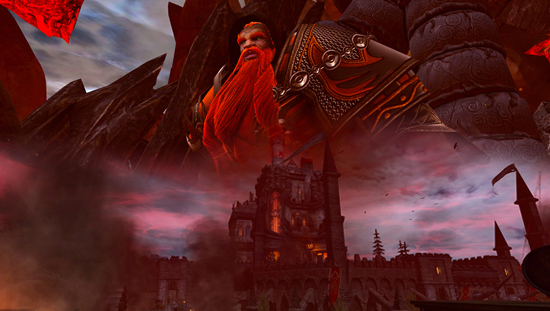 The free-to-play Neverwinter — the new Dungeons & Dragons MMO — is nearly upon us, and today Cryptic Studios has unveiled a new zone: Mt. Hotenow, the volcano whose ancient power gave Neverwinter its name and whose eruption nearly destroyed the famous city. See the trailer and learn of the volatile new threat that players must contest!

Set in the Forgotten Realms campaign world, Neverwinter is a long-awaited game, and it carries the legacy of the popular Neverwinter Nights series that began back in 2002. Choosing an elf, half-elf, dwarf, halfling, human, or tiefling, you are charged with defending the beleaguered city from several villainous factions — like the necromancers of Thay or the shades of Netheril.

Ah, but now there’s a new threat and a new high-level zone to explore: Mt. Hotenow itself. Decades ago, a great primordial (a being of godlike power) was roused beneath the volcano, leading to the near-destruction of Neverwinter. Now, a second eruption may occur, as a group of fire giants labors to wake the infernal primordial again. If so,the whole of the Sword Coast would fall under its wrath. Cryptic’s announcement today that Mt. Hotenow itself would be a new zone breathes new fire into the highly-anticipated game. So now we know, you can leave the “safety” of Neverwinter itself for a volcanic realm of lava and ash filled with a host of giants. As the following trailer suggestions, there’ll probably be dragons, too. Imagine that!

The Neverwinter saga extends well beyond this game. New York Times Bestselling author R.A. Salvatore chronicles the fate of Neverwinter in a series of novels that bears the same name, and the events of the books are said to overlap the events in the game. Along for the ride, and perhaps an in-game cameo, is Salvatore’s signature character, the dark elf Drizzt Do’Urden. What’s that? You want to play Neverwinter as a dark elf yourself? Good news! It turns out you can pay a measly $200 and get the Hero of the North Founder’s Pack, which allows you to create a drow of your own.

If you’d like a first-hand peek at some Neverwinter gameplay, check out Bog Otter‘s look to see what it’s like for yourself! There sure are a lot of swinging swords and monster grunts, but I’d expect nothing less from a D&D game.