Shut up and Take My Money! Somebody Made A Holophonor from Futurama

Only a few people in the whole universe can play that -- and they're not very good at it. 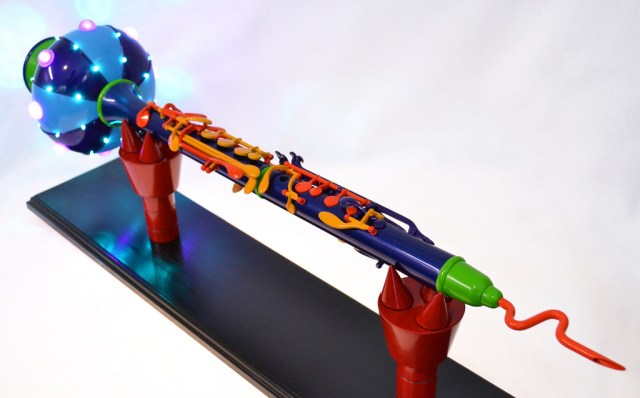 Ever wanted to tell your one-eyed girlfriend how much you love her, but without all those annoying words that get tangled up in your dumb 20th century brain? The holophonor would be able to help you with that — you know, if it were real. One lucky client of Volpin Props is going to get pretty close, though, with this amazing replica of the Futurama prop.

Featured in the episodes “Parasites Lost” and ““The Devil’s Hands Are Idle Playthings,” the holophonor can be best described as something between an oboe and a holographic projection machine. Prop master Harrison Krix described the process of bringing this wacko instrument to life on his blog:

Since Futurama is hand drawn, the Holophonor varies wildly from shot to shot. Sometimes whole sets of keys are missing, sometimes it looks about a foot shorter then normal, and the lower bell seems to be anywhere from 6″ around to over 18″ depending on which frame you’re looking at. I fired up Netflix and grabbed a ton of reference. The keys in some of the more detailed shots reminded me of a clarinet, and the more I checked, the more that I was certain the Holophonor was inspired by one – the grouping of the 4 long keys at the bottom, the same number of front facing valves, even the very long upper hinged keys.

Note that this probably wouldn’t ever actually sound like the holophonor from the episode, which is actually closer in tone to a bansuri flute than it is to an oboe. Then again, it also doesn’t project holograms, either. But it does light up!

There are more in-process shots at the Volpin Props website, and let me tell you — they are pretty impressive.