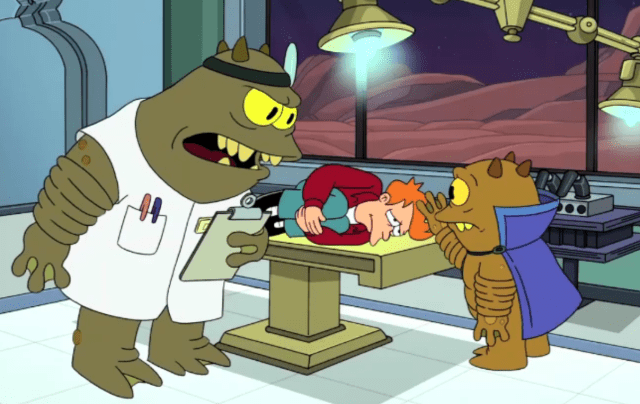 Futurama has been cancelled before, but it looks like this time it might really, truly be over. Comedy Central has decided not to order any more episodes of the show, and will just it march slowly to its death on September 4th as it closes out its seventh season. The news will no doubt upset fans, but the show’s executive producer David X. Cohen isn’t surprised.

Older fans may remember a time when Futurama ran at various time slots on Fox before being put out to pasture in reruns on Cartoon Network’s Adult Swim. The show managed to do well enough in reruns to be revived in the form of four direct-to-DVD movies that were picked up by Comedy Central as a de facto fifth season. That fifth season did well enough for Comedy Central to order a sixth and seventh, but they haven’t done well enough to warrant an eighth.

Futurama was a show that got a lot of second chances, so Cohen isn’t particularly shaken. He said:

I felt like we were already in the bonus round on these last couple of seasons, so I can’t say I was devastated by the news. It was what I had expected two years earlier. At this point I keep a suitcase by my office door so I can be cancelled at a moment’s notice.

The executive vice president of programming at Comedy Central Dave Bernath said the show’s had “a helluva run that few shows achieve.” He’s choosing to look at this optimistically by pointing out that the network managed to give the show 52 more episodes than it would have had otherwise, and calls Futurama’s comeback a blessing.

Show creator Matt Groening also seems optimistic about the show’s final 13 episodes which will begin airing this June. He also said that he has more stories to tell in the 31st century, but that if the show needs to end, the episode currently slated to be the series finale is “an epic ending.”

Groening and Cohen haven’t completely ruled out another revival of the show, but they’re going to wait and see how fans react to the news and weigh their options. At the moment, though, there are no serious talks to bring the show to another network.