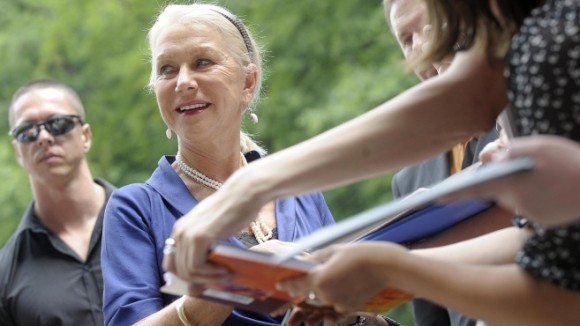 Helen Mirren has been hanging out in Czech Republic recently for the Karlovy Vary International Film Festival. While there, she paid tribute to the late Nora Ephron and brought up the all-important question: Why don’t we have more female directors? Hey, good question! And what better person to raise it than a heavily awarded woman with decades in the business?

While it’s true that women in Hollywood have made some progress behind the scenes, it’s just not that satisfying when those numbers are nowhere near equal, women being half the population and all. And if it takes the more recognizable women who appear on-screen to say something in order to get our attention, then let’s have at it! Just a couple of weeks ago, Meryl Streep wondered out loud why Hollywood wouldn’t want all that money from female moviegoers when some of the most successful movies in recent years were actually geared toward women. And who needs to make the call to develop movies like that? Executives — executives who seek out producers, screenwriters, and directors. And more of those people should be women.

Enter Helen Mirren. Attending the festival to accept a lifetime achievement award, she used her time in the spotlight to sound the alarm for more female directors and screenwriters. After spending a bit of time celebrating Ephron’s contributions as a female director and screenwriter, she said it was time for more women to follow in her footsteps:

“When I was making those (early) films, they were very, very few female directors, and there were certainly no women on set, which made taking one’s clothes off all the more difficult …

“Things have moved on, but as far as I’m concerned, they haven’t moved on enough.”

Mirren pointed out that she didn’t know the exact amount of women presenting films at Karlovy Vary, but knew it was well below 50 percent. And that’s a number she’d like to see change “should she return in five years.” So, hear that, Karlovy Vary International Film Festival? No Helen Mirren unless you feature more movies by women.