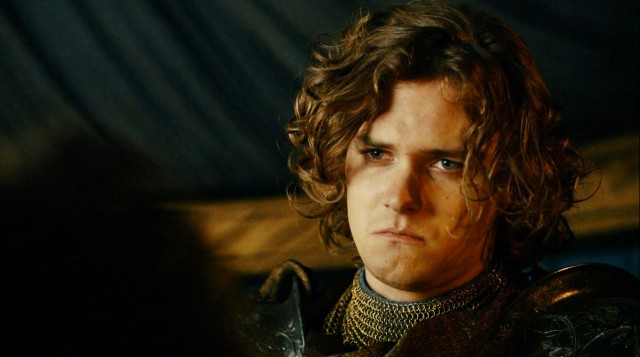 I think I can guess which part of the headline caught your attention. So let’s start with this question, asked of George R.R. Martin at the Edinburgh International Book Festival: Why is there no gay sex in A Song of Ice and Fire?

For some context, if you need context for Martin being asked about gay sex: While there’s a fair amount of bow-chicka-bow-wow in Game of Thrones, none of it is same-sex, seeing as there are no canonically non-straight characters. Martin hints, very heavily in some cases, that certain characters are gay (Loras and Renly) or bisexual (Oberyn Martell), but it’s never outright stated, “Loras and Renly. Yeah. Totally doin’ it.”

So why keep the frisky business to the straight and narrow? It’s the old I’d-do-it-if-it-were-relevant-to-the-plot chestnut: Martin writes using “viewpoint” characters, and none of the viewpoint characters are established as having same-sex attraction. Thus… no gay sex. “Frankly, it is the way I prefer to write fiction because that is the way all of us experience life. You’re seeing me from your viewpoint, you’re not seeing what someone over here is seeing,” he explains.

“Will that change?” he continues. “It might. I’ve had letters from fans who want me to present particularly an explicit male sex scene – most of the letters come from women… [But] I’m not going to do it just for the sake of doing it. If the plot lends itself to that, if one of my viewpoint characters is in a situation, then I’m not going to shy away from it, but you can’t just insert things because everyone wants to see them.”

While I respect that Martin’s basically like, “Where did you want me to put a gay sex scene?! C’mon now,” this is about more than the act itself—it’s about representation. Can we get some LGBTQA characters, Martin? Please? It doesn’t even have to involve sex at all, because the life of, say, a lesbian, is defined by more than who she has sex with. A gay person is gay even when they’re not having sex. I know. Take a moment.

In frustrating-but-in-a-different way news, Martin also spoke up at Edinburgh about how his teachers tried to get him to stop reading sci-fi on the grounds that it’s not ~~serious~~ enough:

“When I was 12 or 13, I had teachers take away science fiction books by [Robert A] Heinlein and [Isaac] Asimov and say: ‘You’re a smart kid, you get good grades. Why are you reading this trash? They rot your mind. You should be reading Silas Marner.’ If I’d been reading Silas Marner, I probably would have stopped reading.”

Oooooh. Ya been burned, George Eliot. Martin added that the prejudice against genre fiction is breaking down, and, “It’s an artificial distinction anyway—literary fiction in its present form is a genre itself.”

And in other tidbits: In an extensive interview with The Independent (worth reading for Martin’s tales of chess nerdery), Martin spoke about certain, er, intense fans, like the ones who question whether he’ll die before he finishes A Song of Ice and Fire. “I have the best fans in the world for the most part,” he explained. “There is a minority who are annoying, it has to be said… But I just have to accept it. It comes with the territory… With most writers, no one gives a shit when their book is coming out and even when it does come out, no one cares. I would much rather have my problem than their problem.”

And finally, this one’s for my fellow book fans: Martin confirmed that will play an important role in the remaining books, though he won’t be a POV character. All mentions of him, , have been cut from the show so far.

(via The Guardian, Watchers on the Wall)