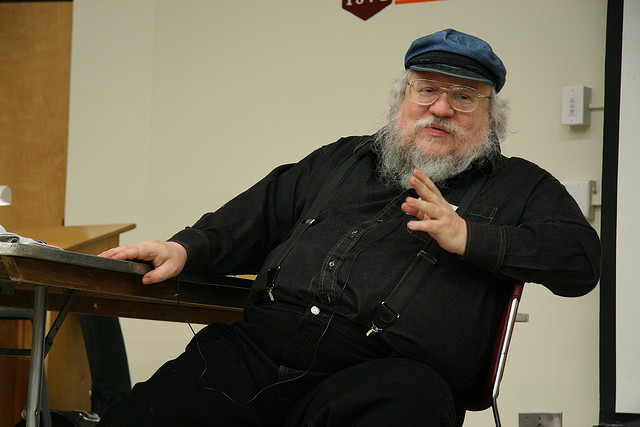 One of the biggest criticisms lobbied at the hit HBO show Game of Thrones —you know, other than the fact that the show keeps downplaying and brutalizing its female characters—is that the world of Westeros is not a particularly well-integrated place. As the series becomes more and more popular, Martin has taken to addressing reader and viewer concerns about diversity in his work.

Recently a commenter who identified herself as a black woman wrote to Martin on his LiveJournal about how the lack of representation on television strongly affects her.

“I am extremely sad that I can not include my favorite, Game of Thrones, as an example of “Hollywood” starting to change how race is depicted,” she wrote, telling the author that she’s happy for Missandei’s recent romantic storyline in the show but still thinks that more could be done. “I’ve seen the new cast and I applaud the casting of DeObia Oparei but must all black people in the series be servants, guards, or charlatans? I don’t know what i’m expecting but I just wanted to let you know that feeling this way really hurts.”

Westeros around 300 AC is nowhere near as diverse as 21st century America, of course… but with that being said, I do have some ‘characters of color’ who will have somewhat larger roles in WINDS OF WINTER. Admittedly, these are secondary and tertiary characters, though not without importance.

Of course, I am talking about the books here, and you are talking about the show, which is a thing apart. I do think HBO and [showrunners] David [Benioff] and Dan [Weiss] are doing what they can to promote diversity as well, as witness the casting of Areo Hotah, which you mention. Of course, Hotah IS a guard… but he is also a viewpoint character in the novels, a brave and loyal warrior.

Fair, but Arianne’s a viewpoint character in the novels too, and… well.

Martin has similarly stuck his neck out for David Benioff and Dan Weiss’ casting decisions before, of course. When a similar discussion occurred on his LiveJournal last year concerning Pedro Pascal being cast as Oberyn Martell, he noted, “It is true that we’ve lost several black characters who appear in the novels (Chataya and Alayaya, Jalabhar Xho, Strong Belwas), but to balance that, characters like Salladhor Saan and Xaro Xhoan Daxos, both white in the books, have been played by black actors. Missandei as well, though in the books the Naathi are golden-skinned, not white.”

He also added last year, “The text — the NOVELS — are actually the only thing I control, but I can say, with some certainty, that there will be people of color therein.”

So what can we expect for people of color in The Winds of Winter? As Martin has said, it will most likely be characters we already know who will take on bigger roles in the story (and many, like Strong Belwas, who we’ll probably never get to see on screen). But hopefully there might also be some new characters from Yi Ti or the other Asian country stand-ins that Martin has fleshed out in his world-building. When yet another fan asked him about the lack of Asian representation in both the books and show, Martin noted:

Well, Westeros is the fantasy analogue of the British Isles in its world, so it is a long long way from the Asia analogue. There weren’t a lot of Asians in Yorkish England either.

That is not to suggest that such places don’t exist, however. You will want to get THE WORLD OF ICE AND FIRE when it comes out in October. In the “Other Places” section you will find a lot of material about Yi Ti, the island of Leng, and the plains of the Jogos Nhai, which you may find of interest.

It’s also worth pointing out that the actor cast as Nymeria Sand, Jessica Henwick, is half-Chinese. Of course, one character who might be read as Asian doesn’t exactly solve the problem of race in Game of Thrones, but at the very least, it can give Martin something to think about as he works on The Winds of Winter. He’s got his own story to tell, of course, but there’s no saying that he can’t be positively influenced by a discussion about representation.

(via Wall Street Journal, image via Chris on Flickr)