George R.R. Martin’s Defends Rape In A Song of Ice and Fire On Grounds of Historical Accuracy 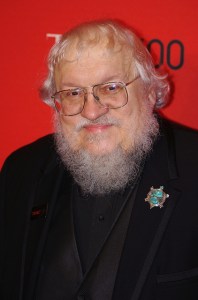 “An artist has an obligation to tell the truth. My novels are epic fantasy, but they are inspired by and grounded in history. Rape and sexual violence have been a part of every war ever fought, from the ancient Sumerians to our present day. To omit them from a narrative centered on war and power would have been fundamentally false and dishonest, and would have undermined one of the themes of the books: that the true horrors of human history derive not from orcs and Dark Lords, but from ourselves. We are the monsters. (And the heroes too). Each of us has within himself the capacity for great good, and great evil… [Westeros] is no darker nor more depraved than our own world. History is written in blood. The atrocities in A Song of Ice and Fire, sexual and otherwise, pale in comparison to what can be found in any good history book.

As for the criticism that some of the scenes of sexual violence are titillating, to me that says more about these critics than about my books. Maybe they found certain scenes titillating. Most of my readers, I suspect, read them as intended.

I will say that my philosophy as a writer, since the very start of my career, has been one of “show, don’t tell.” Whatever might be happening in my books, I try to put the reader into the middle of it, rather than summarizing the action. That requires vivid sensory detail. I don’t want distance, I want to put you there. When the scene in question is a sex scene, some readers find that intensely uncomfortable… and that’s ten times as true for scenes of sexual violence.

But that is as it should be. Certain scenes are meant to be uncomfortable, disturbing, hard to read.”—In an interview with the New York Times, George R.R. Martin addressed the issue of rape and sexual violence in A Song of Ice and Fire, which has been a particularly controversial issue as of late. It’s also something that we’ve discussed at length, so I’m just going to leave this quote here and let you discuss in the comments. But before I go, I want to emphasize that Martin is discussing rape and sexual violence in his books, not in the show, which has added more than a few instances of its own. When asked about the show, Martin only said that it and other visual adaptations, like graphic novels, “are in the hands of others, who make their own artistic choices as to what sort of approach will work best in their respective mediums.” So, basically, no comment.

(via Death and Taxes, picture by David Shankbone)

Previously in Game of Thrones and sexual violence