How Is Greg Benson Still Getting Into Comic Conventions When He is Literally Hitting Cosplayers in the Face? 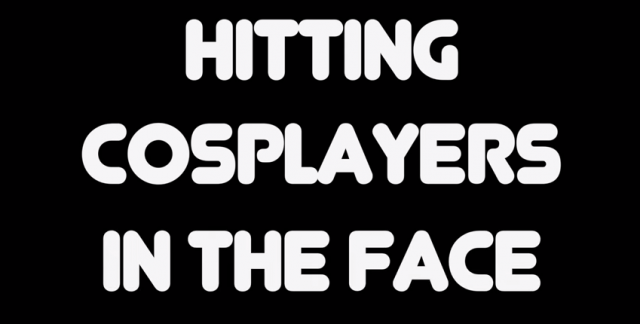 This is the title card of Mediocre Films and Greg Benson’s latest “comedy” video. Think it’s funny? We don’t.

There’s often heated debate over what constitutes comedy and more to the point, being offensive simply to be offensive. But considering the currently climate of harassment in the geek community, patience is thin.

Enter Greg Benson of Mediocre Films. From his “about” page on Facebook:

You may also remember Benson from such “comedy” videos as, what our friend Marlene likes to call, “Cosplay Creep.” We wrote about it briefly in a larger piece on harassment but at San Diego Comic-Con in 2013, Benson produced a video in which he spoke in a sexual manner (innuendo or explicitly) to women in costume without warning.

We don’t want to give his YouTube account more views, but in the latest video titled “Hitting COSPLAYERS in the FACE! – ComiKaze 2014,” (with “How to hit people in the face and get away with it!” in the about section) Benson hits those he’s interviewing in the face with his microphone. Repeatedly.

Most of the cosplayers react with nervous laughter, which is I’m sure how most human beings would respond when they think an accident like that has occurred. But he pressed on, editing together just over two minutes of footage of himself hitting attendees in the face over and over.

Stan Lee’s Comikaze, like more and more conventions each year, has a great harassment policy which includes: “We do not tolerate harassment of convention participants in any form.” We reached out to inform the organizers of the video and received the following statement:

We are very disappointed that Greg Benson decided to hit Comikaze cosplayers in the face in a failed attempt at comedy. His video was solely dependent on making inappropriate and unwanted physical contact with our Cosplayers, which is a violation of our Harrasment Policy. It’s also a curiously poor decision for someone who has been involved with the geek community through his work on “The Guild,” especially in light of the recent wave of harrassment of women.

It’s also just not a funny video, which in and of itself is offensive to us.

We had no knowledge or reports of this harrassment. These are the types of incidents that we ask to be made aware of as it happens, so we can stop them immediately. As a convention we want to provide a safe and fun enviroment for all. We do not take harassment of any kind lightly, and want to take this opportunity to let attendees at any convention — not just Comikaze — know that if they are being harassed in anyway, including inappropriate contact, to please report it immediately to show staff and or security.

So can we stop including Benson at fan conventions? Can we email organizers to let them know this is not acceptable behavior? It’s clear he’s there to make fun of attendees wanting to enjoy themselves and express passion for their fandoms. Is that the type of publicity you want?