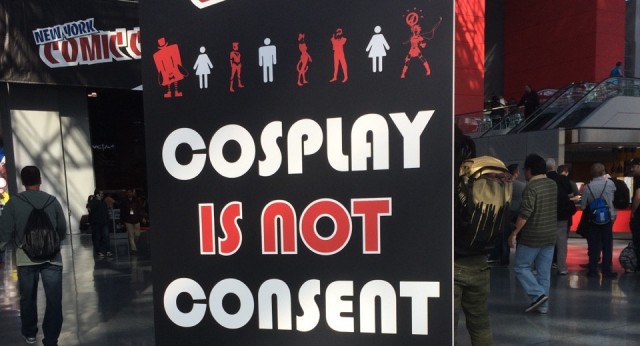 Yesterday was the first day of New York Comic Con 2014, and with it came the convention’s brand new anti-harssament policy and a campaign of making sure it’s visible throughout the con. (Full disclosure: we helped.) We happened to notice that the signs placed around the convention were a topic of interest in Reddit’s r/ComicBooks, and thought we’d highlight some of our favorite comments here!

This is terrific. We need more “DON’T VIOLATE PEOPLE” warnings. Happy to see this instead of shifting the blame back to the non-consenting with things like “Here’s how to avoid getting violated.”

For those who wondered whether signs would be effective against lowlifes who already know what they’re doing is wrong, there were answers, like this one from soulreaverdan:

It’s less about telling them not to do it, and more about making sure everyone else knows and acknowledges that this shit is not okay. Signs like this encourage people to speak out or report things, because the fact that the convention is going out of its way to stand with them hopefully (emphasis hopefully) means they’ll do something about it as well, instead of just ignoring it.

Every now and then someone would chime in to suggest that folks who behave inappropriately at cons aren’t really nerds, just hangers on who came in with the mainstreaming of geek culture. Fake geek jerks, perhaps? But there were plenty of folks like SegataSanshiro around to point out this is a bit like crying “Not ALL Scotsmen!”

Yeah, I don’t subscribe to the notion that “real nerds” or “real geeks” are inherently blameless.

Yeah, I’m a nerd, and yeah, I was beat up and picked on by big football-playing jerks when I was a kid. But it’d be dangerous to internalize that as “I was bullied, therefore I am a victim, and cannot be a bully.”

Geeks and nerds have to realize that it is entirely possible for them to bully others when they’re in a position of influence or power, and to have the self-awareness to know when that can happen.

BallisticGE0RGE shared their own story to point out that cosplay harassment starts from dehumanizing the person inside the costume:

It’s not just women who get harassed either, I cosplay as Carmine from Gears of War, you might remember seeing this on the internet at one point.

But man…the abuse I took from random strangers. I was walking through the show floor at one point, and someone thought “Hey, why don’t I smash my hand right into that guy’s face plate.” From no where this person runs up and with an open hand, slams the front of the helmet…I guess he thought I was invulnerable in the “armor”?

The inside of the helmet, being a carved up paintball mask on the inside, cut into my cheeks, my eyes watered and I was blind for a moment. He just laughed and kept walking.

It was the next day when someone through a soda can at me, hit me right in the head, they of course yelled “Boom headshot!” Very funny, except now I have someone else’s back-washed soda drizzle all over me and I feel like trash.

I get it, I’m in a faceless costume, of a character who people consider the lowest of the low, a joke character. So people stop thinking of me as a person, and simply see me as a mascot.

In conclusion, we agree wholeheartedly with Teebocks:

And they are getting a shit ton of praise and good press for this, which is awesome.

I’m really happy that NYCC was willing to take initiative in making it’s attendees feel safe and appreciated and putting THAT before any worries of bad PR posting signs might cause. I’m even happier that they have been rewarded for their efforts with an extremely positive response on social media and I sincerely hope other large conventions see the positive response and follow suit.

We were super excited to work with ReedPop and the host of other folks we contacted in crafting NYCC’s anti-harassment policy, and we hope it helps lots and lots of people feel safe and fun this weekend.