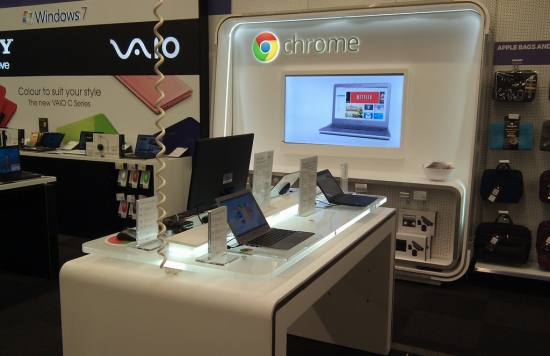 A few months ago, I was in the market for a new laptop. The Google Chromebook line was appealing for its price, but I was unable to find a store that physically had them for me to try. I type for a living, so I’m particular about my keyboard. As nice as the Chromebook is, since I couldn’t get my hands on it, I opted for the Asus machine I use now. To try to prevent this kind of thing in the future, Google is reportedly opening physical retail locations that would let customers get their hands on the latest Google products, and they’ll be coming just in time for Google Glass.

A company moving a store from the web to the real world can sometimes be a step backwards. Yes, I’m talking about you, Polaroid, but for Google I think it could work beautifully. Before a customer lays down a significant stack of cash for a new gadget, they probably want to get their hands on it first.

Getting your hands on something before you buy it can be important if you’re picky about a feature, like me and keyboards, or if you just want to see that the thing is what you’re expecting before you lay out money for it. It can also help potential customers get a fundamental understanding of what a new product is. This can be particularly helpful for Google when they launch Glass, their move into the world of wearable computing.

As we’ve covered Google Glass, we’ve read in our comments section that some people don’t really understand what it is, or why we’re salivating so profusely over it. Glass is so drastically different than anything a lot of people have used or even seen before that the best way to get someone to understand it, is to let them try it for themselves. Google seems to believe that so strongly that they’re willing to launch a chain of retail stores to get Google Glass into people’s hands.

Google has already launched pop-up stores in many Best Buy locations across the U.S. and that program has apparently worked well enough for them to 9to5Google says the company will launch stand alone retail locations. The major difference will be that the Google employees in the Best Buy stores are there in more of an educational capacity for customers. Best Buy still handles the actual sales. The standalone Google stores would see the company taking over the whole transaction from start to finish.

If the rumors are true, the stores will be opening by the end of the year to coincide with the launch of Google Glass

(via 9to5Google, image via osde8info)