After a Collective Whine Heard ‘Cross the States, Ghostbusters Will Now Be Released in the U.S. 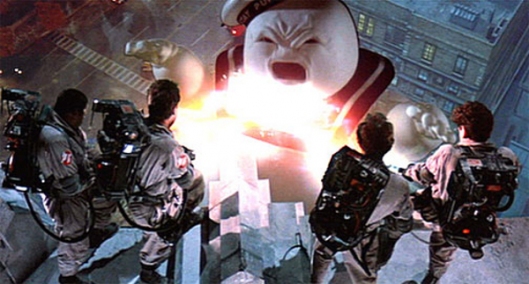 We’re guessing two things happened that convinced Sony to re-release Ghostbusters in the United States: 1. They were already planning to re-releasing it in the United Kingdom, as if they’d accidentally chosen the wrong option in an online drop-down menu, so we Yanks across the pond started crying about it, or 2. the monumental success of The Lion King‘s 3D release gave them a few ideas. And now that it’s crossed the minds of the Powers That Be, much like Ray thought of the form of the Destroyer and came up with the Stay Puft Marshmallow Man, Ghostbusters will now materialize in US theaters.

First, to be clear, the UK release has nothing to do with Sony. But that release, which was being organized by distribution label Park Circus, was only going to be a very limited, short-term release coinciding with Halloween. (Or, rather, Hallowe’en.) The North American release will be slightly longer, and will lead up to Halloween, with one showing every Thursday night in October starting October 13 in 500 theaters throughout the US and Canada. The 1984 movie has been remastered in 2K digital and 5.1 surround sound.

The announcement might have something to do with another movie from another decade that recently made $30 million and was the fourth best September release of all time. Yup, that’s how well The Lion King 3D release did last weekend. And while that is part of a promotion for the movie’s Blu-ray release, bringing Ghostbusters back into theaters might give execs a good idea of how badly the moviegoing public will be clamoring for another sequel, which is supposed to start filming in the spring. And perhaps if Bill Murray can find out just how much we all love him and desire his presence in a third movie, he will finally commit to appearing in it.

Something to remember ahead of those numbers, however: The Lion King is a family movie — that is also a Disney movie — and has a solid two weeks on 2,300 screens. Ghostbusters was rated PG (slightly older family-friendly) and will get exactly three screenings on 500 screens over the course of three weeks. Slightly different situations, but we’ll see what kind of crowds show up. (Besides those of us who have been quoting the movie like Scripture since childhood.)