"Ethics of game journalism" my ass. 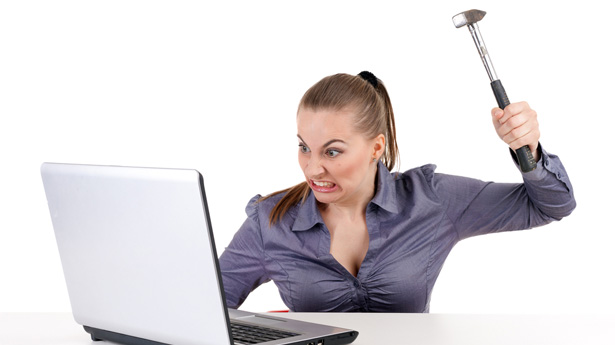 [Trigger warning for harassment and rape threats.] It’s heartbreaking that another article about harassment in the gaming community is necessary, but the escalating and ongoing vitriol being spewed against women and their male allies who dare to criticize gamer culture or work in video games is continuing to take on new and disappointing forms.

Writing about #GamerGate feels increasingly fraught (I feel for the subjects of harassment who might just want some g.d. peace and privacy) and futile (if you can’t understand why it’s reprehensible to send people rape and death threats just for doing their job, then you might be incapable of empathy), but it’s also important to continue saying, for as long as it needs to be said, that violence–and yes, threatening someone over the Internet is a violent act–cannot be status quo.

Last week we posted an article on harassment in gaming in which we recounted the recent controversy surrounding Anita Sarkeesian, Zoe Quinn, and the treatment they received at the hands of gamers like Firefly‘s Adam Baldwin. This Monday, Jenn Frank, an award-winning freelance game journalist, wrote a piece entitled “How to attack a woman who works in video gaming” for The Guardian that looked at ongoing harassment and addressed #GamerGate’s concerns over ethics in game journalism. Frank outlined the ways in which trolls are harming women who dare to work in the traditionally male-dominated field, and admitted:

For example, someone recently and bafflingly tried to hack into my email and phone contacts. This is all very frightening to write, and so I must disclose that I am biased, insofar as I am terrified. I have worked in this industry for most of the last nine – not always perfect – years and I have never professed to be a perfect person. However, my values, my belief that abuse must not, cannot become “normal”, “acceptable” or “expected” is at odds with oh, God, please, why are they doing this, what’s the point, don’t let it be me, don’t let it be me.

My unabashed love for video games, my colleagues and my work have a conflict of interest with my own terror.

Frank’s article was a call for empathy and level-headedness, and as someone who has seen first-hand the harmful comments and threats that have been directed towards women in the name of “ethics,” I was heartened by her courage. Unfortunately, Frank’s comment on the terror that is almost inherent for some women in gaming is now even more apt.

Yesterday Al Jazeera published an article about #GamerGate, calling the hashtag a trend “alleging corruption and condescension in gaming media.” (That word “condescension” is beyond problematic. Yes, how patronizing of Sarkeesian to suggest that women in video games should be more than just meat! How insulting of so-called “Social Justice Warriors” to say that calling for “ethics” is ironic when you’re simultaneously endangering a woman’s life!)  The Al Jazeera article linked to a piece written by Milo Yiannopoulos over on Breitbart, “Feminist Bullies tearing the video game industry apart.” I’m not going to link to the article because it doesn’t deserve the clicks; if you’ve been following #GamerGate at all on Twitter, most of his arguments will probably be familiar to you already. On September 1st Yiannopoulos also retweeted the image below, which Al Jazeera published with the comment “Yiannopoulos shared a series of screenshots allegedly highlighting corruption in gaming journalism by showing previous online interactions between Zoe Quinn and a writer who came to her defence.”

@Nero “IA: Can anyone explain to me what the fuck @guardian is doing? Or is this not against their ethics policy? pic.twitter.com/dbFaQnw7ez”

Comments on the Al Jazeera story claim that Yiannopoulos has received death threats; Frank has also been harassed since the image began circulating. After the totally-not-at-all-shocking “reveal” that working as a freelance journalist does not mean you are an island and thusly many critics of #GamerGate have had professional contact with each other, the Guardian piece was edited to include this addendum:

Frank posted several Tweets yesterday about the addition to her article:

If anything I am in trouble for, pardon me, insisting on an addendum — for YOU — that establishes a dangerous legal prescendent for op/eds — Just Jenn! (Frank) (@jennatar) September 4, 2014

[UPDATE: Earlier today The Guardian added this important footnote to Frank’s article. Bolding my own for emphasis:

The following footnote was appended on 5 September 2014: An earlier footnote, appended on 1 September, made clear that Jenn Frank had purchased and is a supporter of Zoë Quinn’s work, although this is the first article she has written on the developer and that Frank has also briefly met Anita Sarkeesian. These facts had been included as a footnote by Jenn Frank when she filed her copy before publication but removed by editors because they did not fulfil the criteria for a “significant connection” in line with the Guardian’s editorial guidelines. However, the Guardian wishes to make clear that it was an editorial decision originally to remove the original disclosure, not one made by the author, and we are happy to have restored it in the interests of full disclosure.

The screenshot alleging Frank’s “corruption” that was originally embedded in the Al Jazeera article also appear to have been taken down. Hopefully this new information from The Guardian can help direct conversation back to the misogynistic double standard being supported by some vocal participants in #GamerGate, and away from the distracting and ironic concern for game journalists’ ethics.]

According to Frank’s Twitter feed, she has decided to step back from games journalism due to the overwhelming amount of harassment and doxxing threats she’s been receiving. Frank isn’t the isn’t the only talent who has implied they may be leaving the industry to preserve their well-being; media critic and game designer Mattie Brice posted on Twitter earlier today:

i will continue to get minoritized people involved with think about play, but i won’t recommend they join the industry — Mattie Brice (@xMattieBrice) September 4, 2014

i’m being harassed because i am allowed to speak outside of the system, which is why pubs are just letting this roll — Mattie Brice (@xMattieBrice) September 4, 2014

otherwise, i won’t be involved with anything tied to the games industry professionally anymore. i put in my time — Mattie Brice (@xMattieBrice) September 4, 2014

The real #GamerGate is not about “ethics in journalism,” (although I’ll admit the severity of the harassment women in my community are facing does raise an ethical dilemma for conscientious journalists; I worry that just by writing as responsibly as I can about an important issue I may increase the vitriol directed at people already impacted on either side of the debate). It is not problematic for a games critic to critique video games through a certain lens; that’s their job. If your response is still “but Kotaku! But Quinn!,” remember that Quinn’s ex-boyfriend has amended a typo in his earlier statements to show that any sexual relations Quinn may have had with writer Nathan Grayson did not coincide with Grayson’s Kotaku coverage on Quinn. Regardless, if you still thought the gaming community’s real skeleton in the closet was “transparency in game journalism” rather than misogyny, then you’ve ignored the double-standard evidenced in the amount of hate directed at Quinn, rather than Kotaku itself. Paste puts it better than I can:

That’s [harassment] the scandal here. Not that some journalists are friendly with some game designers, or that review copies of games are often sent early to critics (an entrenched practice that occurs across the entire spectrum of tech and entertainment journalism, and which is crucial to informing readers in a timely fashion). It’s that a vocal minority of videogame fans who tend to congregate at sites like 4chan and Reddit, who blanket twitter and comment sections with hate and anger, and who adopt the exclusionary identity of “gamer” have united to intimidate and silence videogame fans, developers and writers who aren’t like them or don’t think like them. And the leaders of that movement, the ones who stir up the most resentment and convince their followers that it’s not about hate but ethics, the YouTube “personalities” and condescending Breitbart hacks and, uh, Firefly’s Adam Baldwin, are all well-established opponents of equality and social justice.

While #GamerGate distracts from the real scandal of ongoing harassment, the #NotYourShield hashtag has been adopted by minority groups to represent frustration with “Social Justice Warriors.”

Because my race and orientaion doesnt give you the right to use me in your agenda im #notyourshield http://t.co/CSX1hNzJRY #gamergate

However, some Twitter users warn that 4Chan trolls may also be using the hashtag by creating fake Twitter accounts:

This ongoing uproar in the gaming community is not about journalistic ethics, it’s not really about the gall of Social Justice Warriors (the fact that a moniker like #SJW is pejorative is profoundly f’ed); it’s about systematic misogyny and abuse, the ease with which harassment occurs online, and the fact that publishing an article calling for empathy could engender enough hate to make you want to quit writing forever. I’ll leave you guys with these positive projects from Quinn, because something good needs to result from this terrible, terrible “debate:”

I am starting an organization to provide resources & outreach to victims of online hate mobs run by survivors of them — Zoë ʻTom-Kunʼ Quinn (@TheQuinnspiracy) September 4, 2014

If you have been the victim of an online hate campaign of any scale and are interested in giving feedback, please email [email protected] — Zoë ʻTom-Kunʼ Quinn (@TheQuinnspiracy) September 4, 2014