Game of Thrones Recap: Breaker of Chains | The Mary Sue 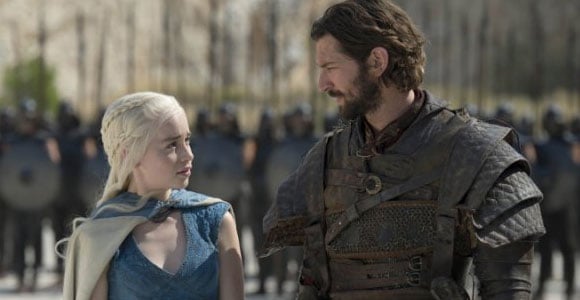 How do you follow up an episode that was sure to cause pure elation throughout the fandom of Game of Thrones? That was the unenviable task ahead of David Benioff and D.B. Weiss in penning episode three. Which character committed the most horrendous act this week? Who had the best line? Let’s dive in.

Note: We’re trying something a little new for this season of Game of Thrones. We ask that you please keep your comments to all the recaps spoiler-free. We’ll put up a spoiler-welcome open thread for the book readers immediately after each recap goes up. It’s here. Let’s go talk about the changes to the scene where the thing happened.

Benioff and Weiss know we can’t get enough of dead Joffrey and his stupid, suffocated death face. So they kick off episode three with a bloody bit of fan service, starting right on the parting shot of “The Lion And The Rose,” A.K.A. “The Purple Wedding.”

Following Joff’s murder, you might think the realm would quickly devolve into utter chaos, re-igniting the clash of kings, or turning the Lannisters and Tyrells against each other. But instead things were pretty quiet in King’s Landing. Margaery ponders whether she is queen or not. Tywin begins coaching young Tommen for the throne. Cersei grieves in sneers and mostly silence, and Tyrion rots in jail as new alliances form to frame him. Frankly, it was a kind of dull episode made up mostly of setups for future storylines. But that’s not to say there weren’t some standout moments. Benioff and Weiss gave us lots of bookkeeping, but they also offered blood, brutality, and butt cracks.

This week we learned whether or not Sansa took up Ser Dontos’s offer to flee King’s Landing. And for a brief moment it seemed that at last Sansa would truly be free of the place and all its treacherous residents. But then she boards her saving ship to come face-to-face with Lord Baelish. (“Call me Petyr.” Blech.) Not only is he grossly handsy with the young and married Sansa, Littlefinger is quick to kill the man she would credit with her rescue. Then he shatters Sansa’s delusions as well as the necklace Dontos gave her.

Once again, the rules of her parents and the fairy tales of noble knights have failed her. Now she may be more alone that ever before. As far as she knows, her entire family is dead. Dontos is dead. Her husband and possible ally Tyrion is lost to her. All she has is Littlefinger. That’d be enough for me to try to swim back to shore, Lannister rage be damned. But hang in there Sansa. While Dontos was a fool in many ways he isn’t wrong in that “You’re stronger than you know.”

Also in desperate need of friends is Tyrion, who’s being kept in the dungeons–though notably nicer ones than held Ned Stark not too long ago. Shae is far away (so we’re told). Bronn is being kept from him. Jaime hasn’t visited. Sansa has fled, so all he has is Podrick Payne, a boy so loyal it could get him killed. After having such a meaty scene with Joffrey last episode, it sucks to see Tyrion given so little to do except essentially repeating his Shae scene by chasing Pod out of his life to safety. I suppose there’s always next week.

Unexpectedly, I really felt for Cersei tonight. Generally I like Cersei in the way you might like a Disney villain. (Sure, Ursula is a total jerk, but she makes The Little Mermaid exciting!) This week my heart went out to Cersei as the worst day of her life just stretched on and on, figuratively speaking. Just after Margaery and Olenna Tyrell make a vague reference to who might be Margaery’s next husband, we none-to-subtly cut to Joffrey’s younger brother Tommen, standing by his mother overlooking Margaery’s latest dead king.

So she’s lost one son, and instantly loses her other to Tywin’s influence, with his big speeches of what makes a great king and his build-up to “the talk.” (Cutting away from what surely would have been a remarkably awkward scene between grandfather and grandson-squared is something I will never forgive of Benioff and Weiss. Never!) Cersei is silent but clearly in pain as she watches her boy slip away. But there’s nothing she can do, is there? So in a very Much Ado About Nothing move, she seeks comfort in her brother/lover Jaime, crying openly and begging him to kill Tyrion. (“Oh God, that I were a man! I would eat his heart in the market place!”) As much as I love Tyrion, I felt for Cersei, blinded with rage and grief. Then from very bad to so much worse, Cersei loses her only remaining friend when Jaime rapes her. His sister. His first and only love. The mother of his children. At the foot of their dead son.

Are you okay out there? Because I’m not.

In this week’s Adventures of Arya & The Hound, Arya learns a tough lesson about survival and silver. She might like to think she’s rubbing off on The Hound, but it’s working both ways. Sure, he didn’t kill that farmer and his daughter, but neither did Arya petition as hard as she once did for him to be fair. Stark girls are growing up fast.

Later came some grim bloodshed as a steely Ygritte led a charge on a village to cause the kind of slaughter that might force the Crows out of their nest at Castle Black. It didn’t work, but it did allow the writers to give more screentime to that cannibalistic tribe of Wildlings called Thenns. With their dedicatedly shaved heads, self-scarred faces and obvious nightmare-inducing dialogue (“I am going to eat your dead mommy.”) these guys don’t seem a great fit for the show, coming off as cartoonish in their villainy. But it’s early days. Maybe I’ll develop a taste for these people eaters.

Finally, the episode wraps up with Dany and her army reaching the end of the long road to Meereen. Having freed the slaves of Astapor and Yunkai, she’s now come to this city with grand pyramids built by slaves to set the oppressed free. But first she needs to get their attention.

When some macho Meereenian comes out to play champion, the men of Dany’s entourage predictably quibble for the chance to defend her honor. Cheers to Emilia Clarke. Sometimes she plays Dany so stone-faced that it’s hard to get a read on the girl’s emotions, but here it seemed like she was playing a game of chess with her inner circle as its pieces. Expertly, she cajoles Grey Worm, Barristan, and Jorah out of the champion spot. Then Daario, wearing his leather armor and radiating confidence, steps forwards as she knew he would. That slight smile she offers after his speech would make Mona Lisa proud. 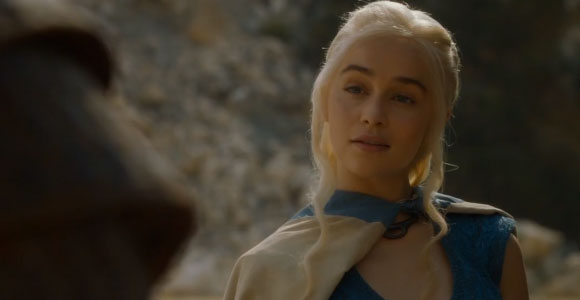 I know some of you are still on the fence about the Daario recasting (and others flat-out hate it). But I much prefer Michiel Huisman‘s version. It is still confident and a bit cocky, but it lacks that off-putting smarminess of Ed Skrien‘s clean-cut version. I can totally get why Dany is crushing on the guy in spite of herself. That wink. The kiss of his blade before burying it in the eye of his opponent’s charging steed? The killing the champion of Meereen literally before the dust clears!? Come on, that was awesome.

Having set the stage with a literally killer opening act, Dany delivers a speech that reaches high above the protective walls of Meereen to the ears of every slave. She offers them freedom and a chance to rise up against those who have oppressed them. Then she delivers her deathblow via a keen bit of theater, hurling barrels full of the slave collars she and her army has gathered from the crucified slaves that led the way to Meereen.

In the eyes of a slave who picks up one of the launched collars, we see the thirst for rebellion and revenge ignite. Behind him stands his master. While one wears a coarse leather collar of slavery, the other wears a soft and colorful silk collar of luxury. It’s a sharp image that ends the episode on a thrilling note and neatly cuts one more massive battle scene from Game of Thrones season budget. I know it’s only episode three, but I am beginning to lose patience on cutting away from Dany’s conquests. Here’s hoping the show’s writers are building toward the kind of battle we can really sink our teeth into!

To make the wait to next week’s episode a little less painful, enjoy this mash-up of Frozen‘s “Let It Go” for Game of Thrones fans: