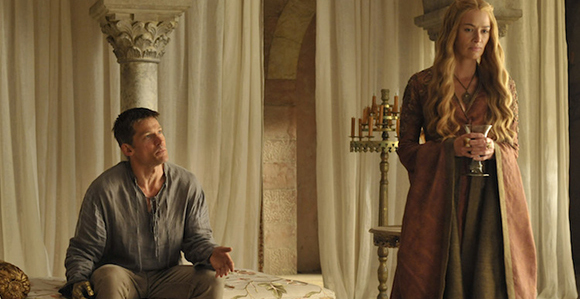 Even if you don’t watch Game of Thrones, you’re probably at least vaguely familiar with the controversy surrounding the most recent episode, “Breaker of Chains.” Tl;dr—a sex scene that is widely read as consensual in the books was changed to be rape. It’s all the entertainment corner of the Internet’s been able to talk about so far this week, and rightfully so: Aside from being messed up on its own, the scene serves as a crystallization of this extremely popular, critically lauded show’s problem with using sexual violence against women for shock value.

Since “Breaker of Chains” came out, director Alex Graves, co-showrunner David Benioff (who also wrote the episode with D.B. Weiss), Nikolaj Coster-Waldau, and George R.R. Martin himself have all spoken out about the scene. What they have to say will probably make you angrier. Fair warning.

The scene was read by pretty much everyone who watched it as rape, probably because of the way Cersei said “No, no” all the way through it and Jaime responded to her “It’s not right” with “I don’t care.” Which, y’know… that’s pretty rapey. But Graves doesn’t see it that way; he told HitFix that the scene “becomes consensual by the end, because anything for them ultimately results in a turn-on, especially a power struggle.”

He elaborated in an interview with Vulture, clarifying where the hell we were supposed to get Cersei’s consent from:

The consensual part of it was that she wraps her legs around him, and she’s holding on to the table, clearly not to escape but to get some grounding in what’s going on. And also, the other thing that I think is clear before they hit the ground is she starts to make out with him. The big things to us that were so important, and that hopefully were not missed, is that before he rips her undergarment, she’s way into kissing him back. She’s kissing him aplenty.

OK. So going by these two statements it could—could—be read as a case of Graves genuinely intending to film consensual sex but just screwing it up royally. He needed to get some outside eyes on that incredibly sensitive scene and ask their owners “Hey, just curious, you’re getting that Cersei’s consenting, right? No? Crap, back to the editing room.” It’s not like he walked into work that day thinking “I’m going to film one of the show’s fan-favorite characters raping his sister.”

In another interview Graves refers to that scene as “forced sex.” And Benioff, in the episode’s video diary, had this to say:

It becomes a really kind of horrifying scene, because you see, obviously, Joffrey’s body right there, and you see that Cersei is resisting this. She’s saying no, and he’s forcing himself on her. So it was a really uncomfortable scene, and a tricky scene to shoot.

“Uncomfortable.” “Tricky.” And rape. Benioff, what you’ve described is pretty much the definition of it. No one was asking that you take the altar scene at it was in the books—depraved and uncomfortable, as it is happening right next to the body of their assassinated son, after all—and turn it into a hallmark of emotional stability. But did you have to make it so whenever, throughout the rest of the show, Jaime has good character moments, you’re asking us to cheer for a rapist? To sympathize with a rapist? Did you have to trivialize rape—which a lot of people in the real world don’t think is a big deal, going by (among many other things) the amount of rape threats that get thrown around online—by including it as a point of character development?

Here’s Martin’s response to the scene:

I think the “butterfly effect” that I have spoken of so often was at work here. In the novels, Jaime is not present at Joffrey’s death, and indeed, Cersei has been fearful that he is dead himself, that she has lost both the son and the father/ lover/ brother. And then suddenly Jaime is there before her. Maimed and changed, but Jaime nonetheless. Though the time and place is wildly inappropriate and Cersei is fearful of discovery, she is as hungry for him as he is for her.
The whole dynamic is different in the show, where Jaime has been back for weeks at the least, maybe longer, and he and Cersei have been in each other’s company on numerous occasions, often quarreling. The setting is the same, but neither character is in the same place as in the books, which may be why Dan & David played the sept out differently. But that’s just my surmise; we never discussed this scene, to the best of my recollection.

Also, I was writing the scene from Jaime’s POV, so the reader is inside his head, hearing his thoughts. On the TV show, the camera is necessarily external. You don’t know what anyone is thinking or feeling, just what they are saying and doing.

If the show had retained some of Cersei’s dialogue from the books, it might have left a somewhat different impression — but that dialogue was very much shaped by the circumstances of the books, delivered by a woman who is seeing her lover again for the first time after a long while apart during which she feared he was dead. I am not sure it would have worked with the new timeline.

Coster-Waldau, who plays Jaime, acknowledged in an interview with The Daily Beast that “for some people, it’s just going to look like rape,” but “the intention is that it’s not just that; it’s about two people who’ve had this connection for so many years, and much of it is physical, and much of it has had to be kept secret, and this is almost the last thing left now. It’s him trying to force her back and make him whole again because of his stupid hand.”

Just my opinion here, but if your answer to “Is it rape?” is “yes and no,” then it’s probably rape.

(via: io9, The Hollywood Reporter, Vulture, HitFix, Winter Is Coming)