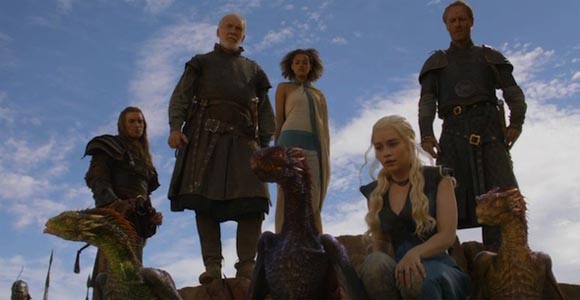 And here’s their acceptance speech, “I’d like to thank the cable companies for keeping a strangle hold on paid channels, the internet, and especially HBO for letting us show so much crazy sh*t.”

In 2012, Game of Thrones was the most pirated show on television ahead of Dexter and The Big Bang Theory. While we knew the Season 3 finale episode “Mhysa” broke piracy records after airing in June, there was a lot of television left to go. But as TorrentFreak reports, nothing could compare.

Game of Thrones has the honor of becoming the most downloaded TV-show for the second year in a row.

With 5.9 million downloads via BitTorrent, the 2013 season finale has beat the competition by a landslide.

More than half of the downloads occurred in the first week after the show aired and the total exceeds the number of traditional viewers in the US. Breaking Bad and The Walking Dead complete the top three with and estimated 4.2 and 3.6 million downloads respectively.

Gotta admit, I’m shocked Breaking Bad didn’t come out on top considering the anticipation of their finale, and that The Walking Dead is so high up. TorrentFreak points out AMC streams the series online for free. Here’s the top ten list for this year:

Earlier this year, HBO made a deal with Google to provide episodes of Game of Thrones and more in their Google Play store. The number one spot also comes in a year where Game of Thrones director David Petrarca publicly said piracy wasn’t really all that bad, then had to backpedal when HBO disagreed.