Break Out The Chalice: Game Of Thrones Beer Is On Its Way 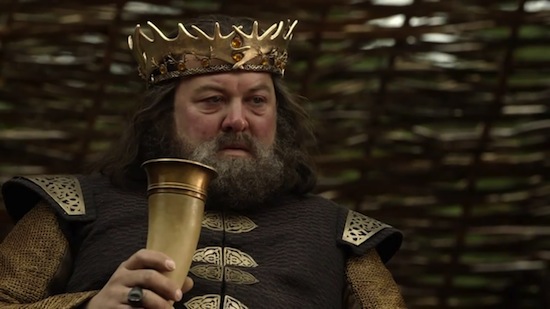 We’ll just go ahead and say it — the thought of watching the premiere of Game of Thrones without a strong, cold, adult beverage just never really occurred to us. Considering how often the characters are quaffing, we just find ourselves in the mood. Not that anyone can blame them for imbibing perhaps a bit too passionately — on the heels of a hard day of blood and fire and political intrigue, there’s nothing quite like kicking back and putting your feet up with a frosty mug of beer. Once again, HBO has anticipated our needs pretty well, teaming with New York’s Ommegang Brewery to produce a Game of Thrones inspired blonde ale that pairs nicely with pigeon pie, a whole pig on a spit, and the blood of your vanquished foes.

Not to tell anyone their business — Ommegang does, in our reasonably well informed opinion, very good work — honestly, a blonde ale seems a little wimpy for a beer inspired by Game of Thrones. When we imagine an alcohol that takes its cues from A Song of Ice And Fire, it’s a nice stout, or a strong red ale, the sort of beer you can stand a fork up in. There’s nothing wrong with a good blonde, certainly — it’s a great choice for a hot summer day or a round among friends after a particularly long 9-to-5 shift — but it’s not the sort of thing you’d feel natural serving out of a chipped clay mug or the bejeweled skull of one who dared to defy you.

The “Iron Throne Blonde Ale” should be available on taps when the series premieres on March 31st, but it you want to kick back with a goblet full of the stuff while you type in Aunt Connie’s HBO Go password, you’ll be better served by the take-home friendly 750 ml bottles, which should be available in finer booze dispensaries around the nation. The blonde is just the first of four planned libations due to roll out over the course of this and upcoming seasons. Considering this is a Game of Thrones property, though, you might not want to hold your breath for the Winter Is Coming Lager — your bottle of blonde may be a fine vintage by the time the next installment is ready to roll.