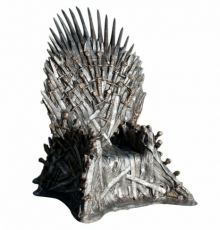 Season 2 of HBO’s Game of Thrones may already be over, but that doesn’t mean you can’t keep up with the universe without reading the books, though granted, you’ll need a large amount of cash to do so. HBO is now selling replicas of the Iron Throne, so you can sit in your apartment and lord over your kingdom of your two roommates and the one cat as an unjust ruler.

One replica throne will set you back $30,000, with a shipping surcharge of $1,800. It’s a humongous, heavy throne, after all. The replica Iron Throne stands 7’2″ tall, with a depth of 5’11”, and width of 5’5″. Basically, it’s big. This replica throne isn’t made of hundreds of melted down swords belonging to the lords who surrendered to King Aegon, it’s made of hand-finished, hand-painted fiberglass, and weighs 350 pounds. That may seem like hefty weight, but if the throne were made of real iron, it’d take a crane to ship the thing.

One wonders if HBO’s replica throne will be terribly uncomfortable, as the Iron Throne is mentioned to be in Game of Thrones considering it’s made of melted swords. This replica, though, probably won’t occasionally cut you when you sit in it like it is said to cut characters in Game of Thrones. If anyone is willing to give me $31,800, I’ll order one and let you know.

(HBO via The Daily What Geeks)