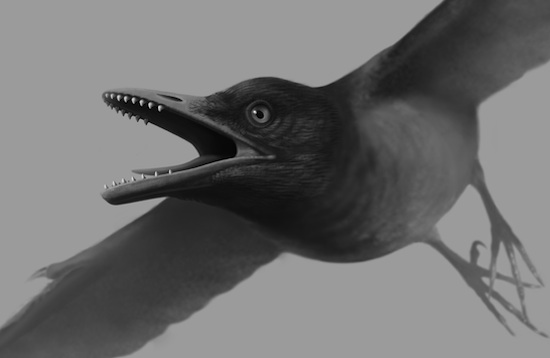 While modern birds have beaks for eating, their ancient ancestors still had toothsome mouths, full of the sharp dental legacies of their dinosaur past. Paleontologists have discovered a new species of early bird, though, and rather than getting the worm, it seemed to prey on hard-shelled animals like snails and crabs. That left it with an evolutionary first — a mouthful of teeth meant for crushing prey, not tearing flesh. It’s an unexpected discovery, suggesting that even as some birds were losing their teeth to evolution, others were developing new kinds of teeth to help them become more specialized hunters.

Sulcavis geeorum lived around 120 million years ago, and the robin-sized bird didn’t exactly rule the skies. As a frequent diner on creatures with hard outer shells, though, Sulcavis geeorum did develop some new traits to help it make the most of its middling post on the food chain. Rather than dinosaur like teeth for tearing meat, this birds teeth were thicker and more robust, with grooves on the edges that would have made them more suited for hunting the prey it survived on. When you’re eating crab dinner, every night, after all, you’re more concerned with getting through the crunchy candy shell than dealing with the soft flesh inside.

Sulcavis geeorum is the first bird to be found with this sort of dental ornamentation, but researchers think it’s a sign that the teeth of early birds could have had many more forms than previously suspected — if grooves for crushing are on the table, for example, why not serrated edges for cutting more effectively? Tooth specialization among bird species that kept their teeth, it seems, could have meant a lot more varieties of teeth than once thought possible.