Fossils Caught in Deadly Embrace Have a Grisly Story to Tell

Generally, fossils are used to learn about the preserved species they represent. However, a fossilized flying pterosaur Rhamphorhynchus pinned in the jaws of a carnivorous Aspidorhynchus fish may have quit the story to tell. Researchers Eberhard Frey and Helmut Tischlinger believe that this fossil represents a hunt gone horribly wrong, ending with both animals dead on the sea floor.

The Not Exactly Rocket Science blog paints a vivid picture of these hunters’ final moments:

The Rhamphorhynchus has a small fish lodged in its throat. It had just caught its prey and had started to swallow it. This animal was very much alive when Aspidorhynchus snagged it. But not for long – Rhamphorhynchus was probably pulled underwater and drowned. But the encounter was fatal for Aspidorhynchus too. Its skull wasn’t flexible enough to cope with large prey, and the pterosaur was too big and bulky for it to swallow.

It probably couldn’t get rid of its victim either. The pterosaur’s left wing bones are distorted, while the rest of its skeleton is intact. Frey and Tischlinger think that the fish tried to shake off its unwanted morsel, clearly to no avail. Perhaps the tough fibres in Rhamphorhynchus’s wing snagged in Aspidorhynchus’s tightly packed teeth. With neither party able to break free, both died.

According to Frey and Tischlinger, they believe the extra weight of the pterosaur overwhelmed the Aspidorhynchus. After struggling to free itself, the fish was drawn down into the deeper oxygen-poor waters where it suffocated. 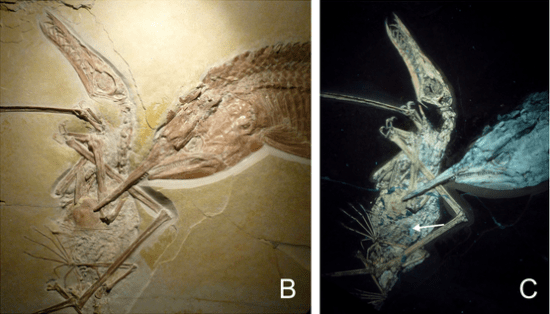 (via Not Exactly Rocket Science, PLoS ONE)