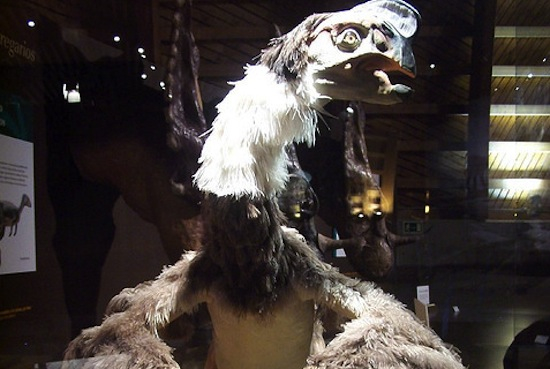 There’s a reason why, despite even the best of efforts, us human males egregiously fail at trying to attract the attention of our female counterparts — and evolution’s to blame. Lacking the colorful and hypnotic menagerie of feathers that our avian friends are fortunate to be sporting, humanity’s male population has only succeeded in sealing its own fate in unrequited love, while birds continue to rub this sad fact in our faces on a regular basis. As if our situation couldn’t get any worse than it is now, recent fossil evidence has shown that feathered dinosaurs known as Oviraptors — hailing from Mongolia — had nearly the same kind of tail end plumage akin to their modern cousins, even going as far as having the ability to shake them about and get a potential mate to notice the exotic dance number. Great, now even dinosaurs are starting to get a superiority complex.

Paleontologists reported this discovery of the Oviraptor’s flexible tail feathers as a means of attraction in the recent Acta Palaeontologica Polonica. Relying on digital recreation technology based on the analysis of the dinosaur’s fossils, the team was able to build an animated model and conclude that, like turkeys and peacocks of today, Oviraptors would flaunt and manipulate their feathers in courtship rituals. Study author and University of Alberta doctoral student Scott Persons added that in addition to feather-flaunting, the Oviraptor would even strike a pose and hold it. Simply put, they were notorious flirts and quite the showmen.

Persons had undertaken this study of the Oviraptor’s courting ability and behavior when he noticed the unique structure of its tail, specifically from the unearthed fossil remains of Khaan mckennai. By nature, Oviraptors have short tails with vertebrate that are in close proximity to each other. This quality predisposes the dinosaur to flexible and strong muscles that allow for a range of complex movement. Also found on the tail was a fused vertebral structure known as a pygostyle, which acts as a connecting point for long tail feathers — a common trait found on the remains of other Oviraptor species Persons had cross-referenced in his study and currently found only on today’s birds.

After analyzing the tail functions of various modern reptiles and birds, and deducing that the feathers were in no way ideal for flight or heat retention — Persons and his team were able to design the animated model of the Oviraptor’s tail, clearly demonstrating the muscle movements he had hypothesized. Now, thanks to Persons’ unwavering pursuit of discovery, the world sleeps better at night knowing that the Earth was once home to a feathered dinosaur that loved the ladies just as much as interpretive dance.

(via Wired, image via frankblacknoir)