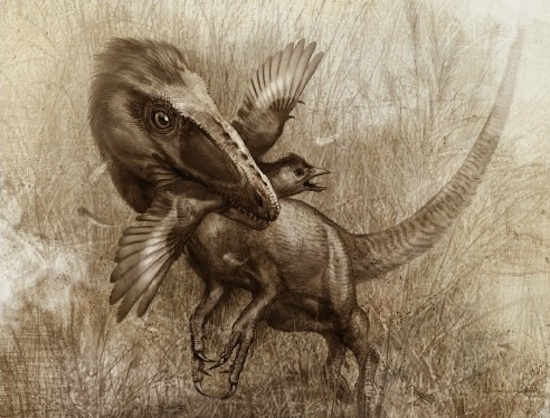 Paleontologists at the University of Alberta have found evidence that a feathered, but flightless raptor-like dinosaur preyed on ancient birds. Three fossils of Confuciusornis sanctus, a primitive bird-like creature, were found in the fossilized abdomens of a pair of Sinocalliopteryx gigas — a relative of T-Rex that was about the size of a large wolf. It’s the first time a predatory dinosaur has been found dining on avian fare, and a reminder that while battles between titans like allosaurus and stegosaurus may dominate our imaginations, the majority of dinosaur-on-dinosaur violence probably looked familiar to anyone who has watched a modern predator stalk prey in a nature documentary. Except it would be with dinosaurs, and thus a billion times cooler.

The sinocalliopteryx‘s diet of early birds — no doubt the fall’s dominant diet fad —  is a surprising one. It didn’t fly and wasn’t very well-equipped to climb trees, meaning that it probably hunted from the ground. Scott Persons, who co-authored the study, says this suggests that sinocalliopteryx probably hunted much like today’s similar predators, by creeping up on prey before it could take flight.

“Modern earthbound predators that successfully hunt flying prey, such as leopard cats, servals, and foxes, do so by being stealthy,” says Persons. “They sneak in close and pounce before a bird has the chance to get airborne.” Once sinocalliopteryx snuck in close, Persons points out, “its sharp serrated teeth and the hooked claws on its relatively-long arms” would have done the rest of the work handily.

That would probably have been an especially successful hunting technique millions of years ago. Flight isn’t an easy trick to master, and it took evolution a while to get it right — in the early Cretaceous, it would have been a might clumsy proposition. Birds like confuciusornis likely had to get a running start in order to get airborne, making them easy pickings for a wolf-sized reptilian killing machine that suddenly appeared right behind them.

The presence of two fossils in near identical states in the stomach of one Sinocalliopteryx specimen also suggests that this was a hungry, hungry dino that was frequently on the hunt for food. The study was published today in the online journal PLoS ONE. You can read it here.

(via PhysOrg, image courtesy of University of Alberta)