New Virus Could Stop Flies From Breeding | The Mary Sue

New Virus Could Stop Houseflies From Breeding, Landing On Your Lunch 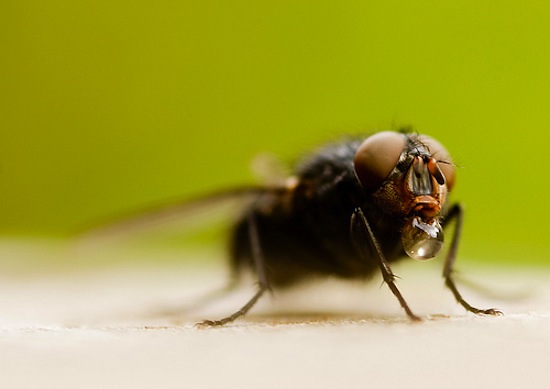 Summer time is just around the corner, which means that house fly season is about to get really real. Out here on the east coast, we’re more worried about the plague of cicadas that’s about to descend upon us, but flies are certainly no treat either. Thanks to the miracles of modern science though, you may one day be able to put down the swatter and relax without worrying about some insect rubbing its disease-ridden hands all over your food. That’s because a team of scientists at the Agricultural Research Service have identified a virus that renders flies incapable of breeding and could help to curb populations of the creatures in the future.

The newest potential weapon against these malady-ridden plague ships is salivary gland heterotrophy virus, or SGHV, and it works not by killing flies, but short-circuiting their reproductive systems. Male flies exposed to the virus are rendered incapable of mating, while females stop producing eggs. So while the fly that’s ruining your meal will still be ruining your meal, you can take some super-villainish comfort in knowing that it will be the last of its line to do so. Just dont’ take too much pleasure in that, because yeah, it’s a kind of sinister sentiment.

Because of the way the virus is spread, getting it into a lot of flies could be a simple matter. Flies can be exposed to SGHV while feeding, which for flies involves throwing up all over their food first, because flies are the worst kind of thing. That means that flies infected at one site can move on to another meal, and throw up particles there that will infect a whole new group of flies with the virus. Wait, really? Okay, this is definitely the way that Dr. Doom would kill flies, and we’re totally behind that, even if it is kind of insidious.

It’s worth noting that the virus will not harm flies that are actually metaphors for your continuing moral decay and downward spiral into corruption. Nothing will stop those flies. Even “Wacky Sax” is powerless against them.