Study Finds That Flies Who are Rejected for Sex Binge Drink, Sheds Light on Addiction 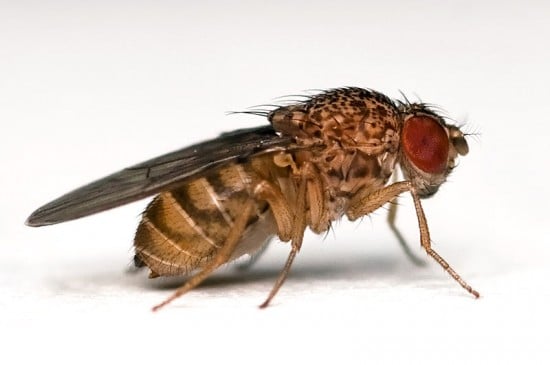 A new study that may shed light on depression and addiction in humans has found that male fruit flies which seek sex and are rejected by female fruit flies binge drink alcohol. The study, led by Galit Shohat-Ophir, focuses on a chemical found in the brain of flies called neuropeptide F which seems to link social experiences with psychological states. Flies, it seems, are just like people, and sometimes just need a cold one at the end of a hard day.

In the experiment, male flies where placed in a chamber with females who have mated, or virgin females. The distinction is important, as male flies inject a chemical called sex peptide along with their sperm into females which makes them disinterested in mating again. Unmated female flies, on the other hand, are generally receptive to courting advances. So some of the male flies in the experiment got lucky, and others did not.

The male flies where then placed in a chamber with two straws. One contained normal foodstuffs, while the other contained food mixed with 15% alcohol. That’s 30 proof for those playing at home, and is equivalent to an incredibly strong beer or a fortified wine. The male flies that were successful in getting some sexy time shirked the alcohol and went for the normal food, while the males that struck out binged themselves on the booze.

The difference, it seems is neuropeptide F. Flies who successfully mated had high levels of the chemical in their brain, while the flies who did not mate had lower levels. Shohat-Ophir described it as, “a switch that represents the level of reward in the brain and translates it into reward-seeking behavior.” The team found that they could predict the choices of flies based on the neuropeptide F levels, and could even induce behaviors in flies by activating production of the chemical. Their work has been published in the journal Science.

While this is all well and good for flies, the research could have broader application. For one thing, it establishes a controllable chemical link between social behavior and psychological states. The flies with low neuropeptide F sought out rewarding behavior, while those who achieved rewards have high levels and were satisfied.

There is a similar chemical in human brains called neuropeptide Y, which scientists already know is in low concentrations for people who suffer from depression and post-traumatic stress disorder. People who, it should be noted, are particularly at risk for dangerous addictive behavior. The hope is that the fly studies may someday translate into effective treatment for addiction, however that will surely prove difficult. In addition to alcohol consumption, previous experiments have linked neuropeptide Y to sleeping and feeding activities in rodents.

Though a practical application is clearly a long way off, this work could one day form the foundation for a new way of looking at addiction and depression in humans.

(PhysOrg, via Geeks Are Sexy, image via Wikipedia)