Cicadas Set to Swarm East Coast, Radiolab Wants You To Help Track Them 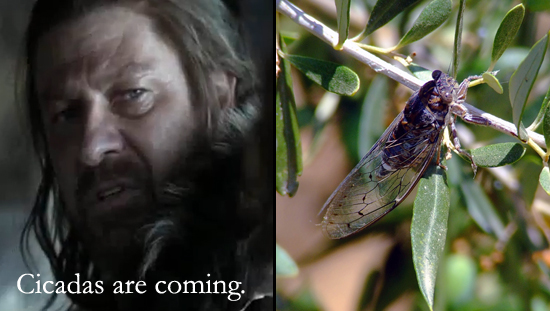 East Coast kids won’t have seen them before, but they’re coming again soon as they do every 17 years: A brood of cicadas known as Magicicada Brood II will make the “air hum with a 7 kHz mating buzz.” These winged, red-eyed, black-bodied 1.5-inch bugs with hatch in their underground lairs and swarm by the millions across the coast, filling the skies. They do this routinely, but this time public radio science show Radiolab aims to track them — and they want your help.

The cicadas sure will be busy, what with all the eating (plant root fluids), mating (with each other, thankfully), egg laying (gross), and dying. They’re not locusts, so they’re not going to devastate crops. But they are numerous and they can still harm young trees and generally freak people out

NPR is quoted as saying that cleaning up after these cyclic swarms “can sometimes feel like raking leaves in the fall.” Fun for the whole family, or at least your kid brother who gets all the worst chores!

No one knows definitely why the bugs’ life cycle is so long, though theories abound. University of Campinas researches posted in 2004 that the 17-year cycle could be to avoid parasites, while others suggest it’s to keep predators like squirrels and birds on their toes.

Cicadas are so adorable.

Over the next two weeks, WNYC wants to get their listeners to help build affordable temperature sensors and stick them in the ground in regions between Connecticut and Virginia. The idea is to collect data that will “give a much finer grain understanding to scientists” about the cicadas, as well as about temperature variations in the Northeast, according to Ellen McCallie, a National Science Foundation program officer.

Radiolab is using a grant from the National Science Foundation to schedule “Cicada Tracker Maker” events in Brooklyn (April 8) and at the New York Hall of Science in Queens (April 14). With the trackers, attendees will be asked to enter data on WNYC’s interactive map, along with photos and audio once the cicadas start to do their thing.

They hope to get more than 500 sensors in the ground by April 15, and track it all here.

If WNYC can get people to bury the cheap, homemade sensors in their backyards, though, tracking cicadas may be just the start of the data they can gather. WNYC senior editor John Keefe says:

“If we can get many, many people building little hard things to put in the ground, that’s just one step removed from monitoring noise, pollution, benzene in the air — take your pick.”