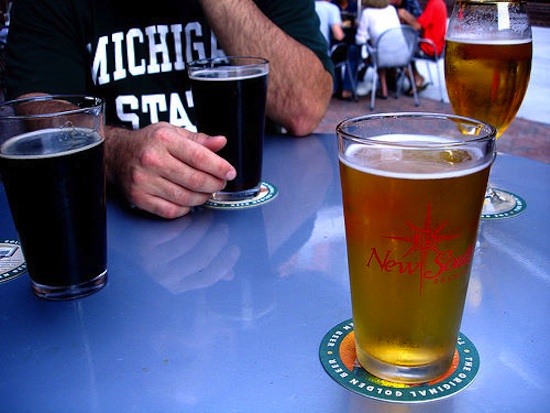 Fly larvae — fine, maggots — that are raised on food spiked with alcohol grow up into flies who can’t learn normally without the aid of a little booze juice, marking yet another way in which maggots are pretty much just like college students. A study demonstrating the difficulties maggots experienced while trying to take in new information without the aid of a morning beer to take the edge off things appears this week in the journal Current Biology, which reminds us that keg stands are not always recreational choices — sometimes they are educational tools.

Fly larvae who had been fed rations spiked with alcohol need a quick liquor fix to get their minds in order and prepare to process and retain new information. Larvae learning was initially obstructed by the fly equivalent of a couple of stiff drinks, as common sense would suggest. In the wake of a six-day ethanol bender, though, the larvae could learn just as well as their sober counterparts after they’d had a few — but seemed learning impaired when they were cruelly denied a glass of grain alcohol with dinner. The study also suggests that alcoholism — long thought of as a human disease — may have closer than suspected analogs in even the simplest creatures.

Past studies have suggested that alcohol can actually kickstart some parts of the brain involved in learning. Neither of those studies will come as any surprise to legions of university kids who are, right at this very moment, terribly hungover in a survey of post-colonial literature, or sipping off of flasks in a geology lab. You know who you are, and according to science, your lifestyle is not without merit. Personally, your intrepid reporter always found a mid-day tipple to be a mighty effective tool for keeping the old shakes at bay that also made learning fun. That said, it was just an English degree at a state school, so it’s not like I was breaking my back anyway. Consider your source and all that.