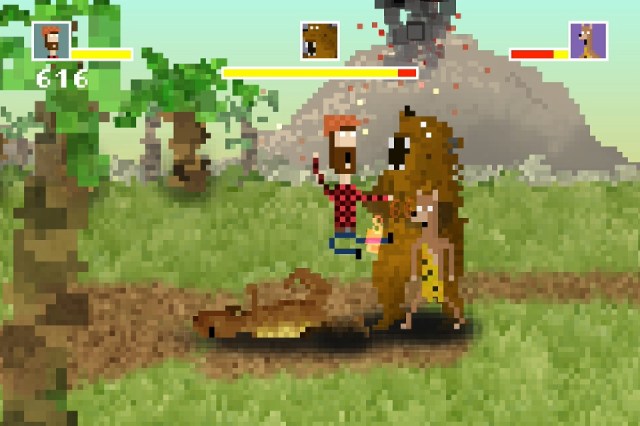 When it comes to video games, we love a bizarre premise. A wacky plot accompanied by odd characters. A time traveling lumberjack who has to stop a “complex interstellar plot to enslave Earth by populating history with homicidal wild animals?” Yeah. That definitely hits the sweet spot.

Fist of Awesome heralds back to a simpler time, when games were in glorious 8-bit, side scrolling, and sported soundtracks that chiptune artists spend lots of time trying to recreate. It’s a button mashing adventure along the lines of Streets of Rage, Final Fight, Double Dragon, and Golden Axe. The whole genre has experienced a wonderful resurgence with titles like Castle Crashers and the Scott Pilgrim vs. the World game, and Fist of Awesome definitely belongs in their ranks.

In the game you’ll play as Tim Burr, your every day lumberjack that gets wrapped up in a situation far bigger than himself… his family is missing, the world has been taken over by animals, and he has to use his new Fist of Awesome to battle them and reclaim the planet. While the game boasts the ability to punch bears in the face, this is a time travel game… so rest assured, you will get to punch some dinosaurs.

The gameplay is simple. Tap to punch, slide to kick, hold down to deliver a powerful “fist of awesome” punch straight to a bear’s jaw… it’s the sort of simple game you can pick up on the go, or spend way too much time in bed playing. So you’re late for work and your boss yells at you.

And the music! We’re hoping that, just like ap0c with that Signature Strikes soundtrack, I Fight Bears opts to release the soundtrack to Fist of Awesome. Cause wow, that soundtrack.

The game is out now for iOS and Android devices, which includes the Ouya and Gamestick. For you gamers who stick to your computers, its coming to PC and Mac platforms this Winter, and its available for pre-order.

Oh, and after you’ve downloaded and found yourself completely smitten with the game, go ahead and visit the game’s microsite. You can download and print out templates to make your own papercraft models of the protagonist with a punchable bear.

(via I Fight Bears, image via Fist of Awesome)