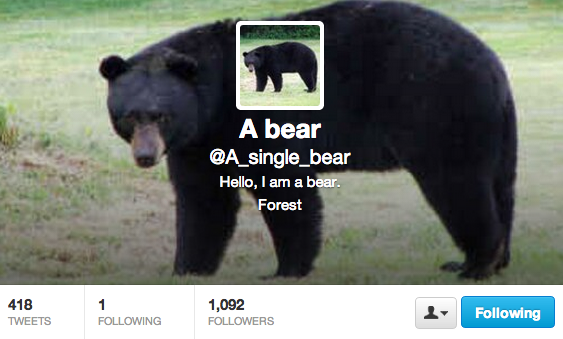 #FollowFriday is the feature where we tell you about a great person on Twitter whom you should be following. Okay, well, this week it’s not a person. It’s more of a bear. But he’s a pretty great bear, believe us.

You know how most animal based parody accounts intentionally misspell words and bend the laws of grammar to their will, presumably because a cat or a goat who’d learned how to tweet wouldn’t be too concerned with legibility? The bear is not like that. He is earnest and quite eloquent, and oftentimes very profound.

But above all else, he’s extremely interested in letting you know how much of a bear he is.

The Twitter people will not verify me. I promise, I am a bear.

I would like to try wearing a hat. I have never worn a hat. What is that experience like? Could it change how I view the world? I am a bear.

I talked to my financial advisor (a chunk of snake skin I buried under a tree) today. He said I had to diversify my claws. I am a bear.

I do not like to hate things, but I do hate the deer who always stands by the river from which I drink. Why stare at me, deer? I am a bear.

And then there was this gem, which we featured in some of our government shutdown coverage:

The #governmentshutdown means fewer park employees yelling at me for rummaging through the trash bins. I am a bear.