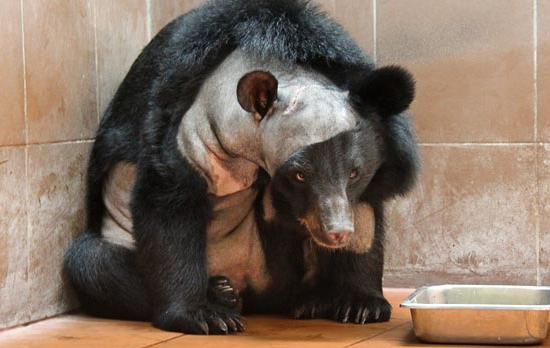 Operating on animals is a bit different than putting humans under the knife, due to all kinds of different physiological and even chemical differences. But it’s not like it’s brain surgery. Y’know, usually. In Laos, a veterinarian recently performed the first ever brain surgery on a bear. Despite her wary — I daresay resentful-looking — expression in the photo above, Asiatic black bear Champa is in fact improving after her surgery.

Champa has lived most of her life in a sanctuary south of Luang Prabang, where a nonprofit group called Free the Bears protects bears rescued from wildlife traffickers. As if having to deal with wildlife traffickers wasn’t bad enough, the old girl also suffered from hydrocephalus, a condition marked by swelling of the brain that can cause mental impairment, vision problems, and death. Champa already had a protruding forehead from the condition, had difficulties socializing with other bears, and the “water on the brain” (as hydrocephalus is commonly known) even impeded her growth and damaged her vision.

Romain Pizzi, the veterinary surgeon who performed the surgery, said, “Having hydrocephalus is like having an absolutely mind-blowing, constant migraine.” Animals with hydrocephalus are are usually euthanized, especially in Western countries. Champa’s fate would have been a slow, agonizing death if left untreated. 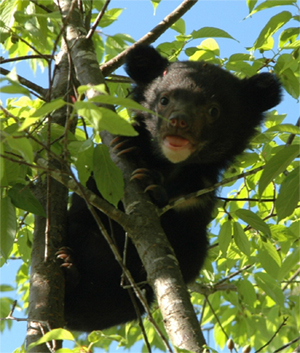 This is what an Asiatic black bear (or moon bear) looks like as a baby. Now, tell me you wouldn't want to help these guys.

Because Free the Bears is awesome — and because Buddhist tradition in Laos is strong — they called in Pizzi instead. A South African who’s worked at the Edinburgh Zoo, Pizzi was deemed the best man for a job that had never been done before. Having operated on seals, reindeer, and jaguars before, he used a “keyhole” method of laparoscopic surgery on Champa. The operation was no small feat — a six-hour procedure performed in a humid environment with dodgy electrical power that involved drilling a hole behind one ear, then inserting a thin tube to drain off excess cerebrospinal fluid.

Six weeks after the operation, Champa is much more active, social with other bears, and gaining weight. She’ll always have some brain damage — the surgery can’t reverse all the ill effects of hydrocephalus — but her life is markedly improved.

Pizzi has performed surgery on bears before, in particular gallbladder surgeries. The bile of the Asiatic black bear is used in some traditional Chinese medicines, and for that reason bile farmers exist, who use dirty catheters and needles to harvest from — and often infect — living bears, meaning the career “bile farmer” is exactly as dignified as its name indicates.

But because he’s awesome, Pizzi said: