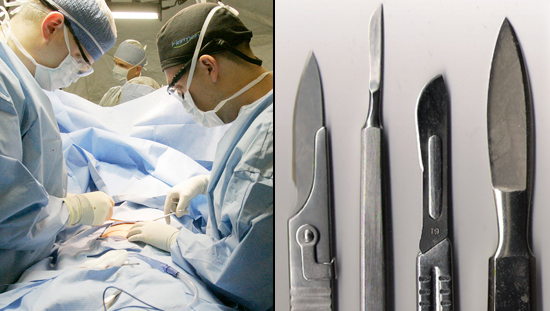 We should all know what coulrophobia is: the fear of clowns. But what about tomophobia, the fear of surgery? While most of us don’t suffer a severe and crippling fear of going under the knife, most of us still have general anxiety around the event. Then there’s that mild but universal concern that the anesthesia administered to us, however unlikely, will wear off in the middle of the operation. It actually happens sometimes — in 0.2 percent of all surgeries — and scientists still don’t know how anesthesia really works. But they’re making strides.

See, anesthesiologists can monitor your heart rate, your blood pressure, and even your muscle tone while you’re under, but there’s been no reliable way to gauge your actual level of consciousness. Which is scary when you think about it, even though it’s been this way all along. Not too many hospitals carry out EEG monitoring during surgery, and when they do, they usually use only three or four electrodes on a single strip across the forehead. This only looks at one brain region, which in turn only offers the probability of unconsciousness. Professor of Anesthesia Tony Abaslom at the University of Groningen tells it like it is. “You don’t want something that says a patient is probably asleep,” he says. “You want to know ‘Are they or aren’t they?'”

Fortunately, Professor Emery Brown at the Massachusetts Institute of Technology offers some hope on the matter. He and his team took 10 adults and attached EEG caps (with 64 electrodes) to their heads. Changes in brain activity were measured across multiple brain regions after a general anesthetic was used to induce unconsciousness. At various stages of consciousness, the subjects were asked to press a button whenever they detected a particular click or spoken word.

This test has allowed Brown’s team to recognize patterns in the resulting array of responses, which better informs when a subject was truly conscious. Which is great news — it can be done! — but it’s worth noting that until scientists invent Dr. McCoy’s medical tricorder from Star Trek, the only way to pull this off is for prospective patients to shave their heads and have conductive gel applied. Otherwise, adding more electrodes is a no-go. D’oh!

Ram Adapa at the University of Cambridge says, “The mechanisms underlying anesthesia remain a mystery,” but agrees that the results of Brown’s team support the theory that anesthesia affects the communication and synchronization between regions of the brain. Yet he warns that it will be a while before such thorough EEG measurements could be used regularly in surgery. Mechanical and electrical interference — both unavoidable in the modern operating room — can mess with sensitive EEG readings.

So there’s hope. We’ve just got to wait it out. And there’s still only that 0.2 percent chance, making it highly unlikely you’ll wake up early during your next surgery. Let’s not fear it.

Just clowns. We should still be afraid of clowns. I mean, regardless.

(via New Scientist, images via Wikipedia and Army Medicine)