To Sniff or Not to Sniff: Animals Display Social Hierarchy Through, Well, You Get the Idea We all know that animals have great noses — especially bears, sharks, rats, and dogs — and that they’re far superior to our own lousy sniffers. We know this because we use man’s best friend as trackers and detection dogs, because we’re afraid of sharks if even a drop of blood hits the water, and because in 3rd Edition D&D most animal stat blocks include the Scent (Ex) special ability. But there’s more to sniffing than just sheer olfactory might. According to a new study, the act of sniffing itself communicates the complex social status between animals.

If a dog sniffs the air when you pull out a bag of potato chips, he just really wants one. That’s all. Maybe he wants to know whether you’ve got Sour Cream & Onion, Barbecue, or just regular. But he’s still going to want one chip. Maybe two.

But when dogs sniff at other dogs — which they do all the time, every chance they can, like teenagers frantically texting each other 24/7 — Daniel Wesson of Case Western Reserve University believes there’s much more going on. In a paper called “Sniffing behavior communicates social hierarchy,” published in Current Biology, he suggests that animals establish their status to one another by the act itself.

It’s just not just about what information their noses glean. It’s about how the other animal reacts to being sniffed. It’s about sniffer vs. sniffee. Does the other sniff back? If it does, exactly how quickly? It all matters. Sometimes a sniffing session turns quickly to a fight, sometimes to cowering before the other. Like they’ve got their own expectations and their own taboos. So what’s going on?

“We know that rats and other animals can communicate through vocalizations, physical contact, odors, and also visual displays. To find that there was an undiscovered form of communication these animals had been using right in front of us this whole time was truly a neat experience.”

He used rats, of course, for his test. Radio telemetry recordings of the rats’ nasal respiration revealed that when one rat sniffed at another, the other would respond by slowing its own sniffing rate. The very direction of the rats’ interactions also varied depending on their relative size and social status. If a smaller, more subservient rat didn’t lower their counter-sniffing rate, the more dominant rat would lash out. I imagine a whole slew of subtleties and meanings in an array of sniff-gestures.

Interestingly, these sniff-exchanges were observed even in animals without the capacity to smell. Again, it’s about the act of sniffing — the body language — not the power of smelling. Animals, in their obviously nuanced, but instinctive behavior, communicate dominance or submission when they sniff or refrain from sniffing. 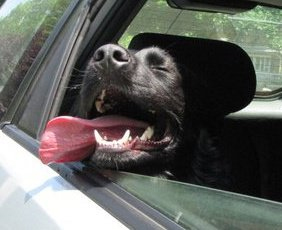 Although Mr. Barbo here demonstrates no such complexities. He just wants to sniff the world. And if it sniffs back or doesn't sniff back...whatevs.