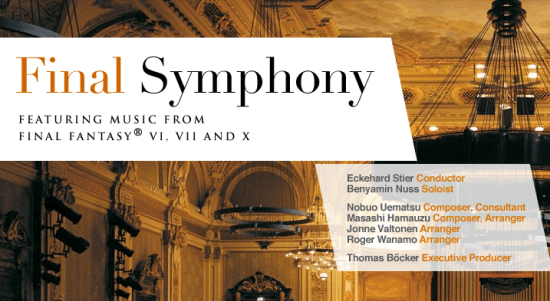 We get that not everyone loves the symphony, but everyone loves Final Fantasy, right? Right. Of course they do. That’s why we’re so pumped about the London Symphony Orchestra’s performance of Final Symphony. It’s a collection of music from Final Fantasy VI, VII, and X, and it’s one night only.

The music was compiled from the games by composers Nobuo Uematsu and Masashi Hamauzu, who have both worked on the music for series. Uematsu composed music for the games beginning with the original Final Fantasy, while Hamauzu came of in the late nineties. Both Uematsu and Hamauzu will be signing autographs at the show.

The London Symphony Orchestra has recorded the music for the Star Wars and Indiana Jones series, and going to see them perform would really impress your high-class friends, as well as your nerdy ones. The London performance is May 30th at Barbican Centre, and the prices range from £30 to £65, which would seem pretty inexpensive if I didn’t also have to factor in a flight to London.

Final Symphony is also getting two additional performances on May 11th in Germany by the Sinfonieorchester Wuppertal at the Stadthalle Wuppertal, but both the afternoon and evening performances are already sold out. I told you everyone loves Final Fantasy.

Thinking about all this great Final Fantasy music, well it just makes me want to dance.