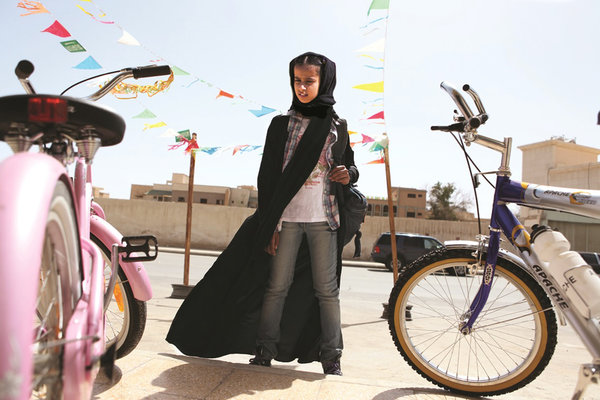 It’s been a fun ride, but our series on female-directed movies must come to an end. We’ve looked at mainstream movies, American indies, foreign flicks, and the very official “whatever” category. I’ve had my say. So this final entry is for you, our readers, to share some of your favorite female-directed movies. And they are:

Wadjda, dir. Haifaa Al-Mansour
This 2012 Saudi film was by far the most recommended. “Its very existence as ‘a movie directed by a woman in Saudi Arabia’ would be impressive enough, but it’s also touching and sad and hilarious, sometimes all at once,” writes commenter Anthony Strand. “The title character is one of the best young female leads I’ve ever seen in any medium.”

The Virgin Suicides, dir. Sofia Coppola
“Did I miss something? Was there really no Sofia Coppola?,” writes AlwaysBeenTim. Nope, but there is now! “She is a refreshing, individual voice. Lost in Translation might have been her most famous film and Marie Antoinette is my favorite, but [The Virgin Suicides] is probably her most accessible.”

Whip It, dir. Drew Barrymore
“Definitely want to nominate Whip It to the list,” writes KatsuJill. “Directed and co-produced by Drew Barrymore, written by (and based on her own novel) by Shauna Cross, starring Ellen Page, and it’s about ROLLER DERBY.”

Ravenous, dir. Antonia Bird
TheresaKP makes a strong case for the late Antonia Bird’s Ravenous: “It’s about cannibal soldiers during the Mexican-American War and stars Guy Pearce & Robert Carlyle. The acting is amazing (some of the supporting cast includes David Arquette, Neal McDonough, and Jeffrey Jones); the story is compelling, and it also makes a statement about American consumerism, although it doesn’t hit you over the head with it; it’s absolutely beautifully filmed; and has the most intense fall down a hill I have ever seen in any movie. I could watch this film a million times and still enjoy it.” After seeing the trailer, I want to skip out on work and go watch this right now.

Wonder Women! The Untold Story of American Superhoines, dir. Kristy Guevara-Flanagan
Orcrist recommends this excellent doc (read my review here) about the evolution of the superheroine from the 1940s to the present. And they say those wonderful words: “free on Hulu“. (Actually, “those wonderful words” are more like “Look, someone’s giving away cake!,” but “you can watch this cool movie for free” is also pretty good.)