DOCTOR DOOM BLOGS AS HE PLEASES!: The Mary Sue’s Favorite Comments Of The Week 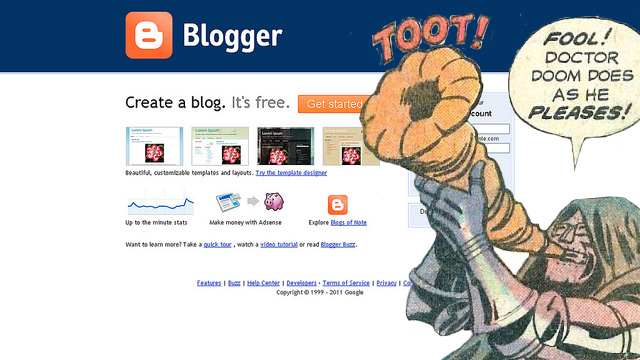 Props to Charlie B on Facebook for finding this delightful gem of a comic book panel to inspire us thusly. Now “anti-social programmer” Doctor Doom doesn’t seem like such a bad idea, as long as he heralds all of his blog posts with an enormous trumpet.

Sweden’s now considering putting warning labels on games for possible sexist content, so you know what that means:

Let us know how that goes for you, #Gamergate.

“I would imagine Doom blogging to be like when Ryan set up Creed’s “blog” for him in the Office, with Valeria just opening up a blank MS Word doc and telling him to go at it.” -Janna, imagining Doctor Doom as a blogger.

“He thinks this is about feminism, but it’s actually about ethics in the Cosplaying props industry. For real this time.” -Natalie Sharp, schooling that guy from LoganProps and his long-winded response to those scam allegations.

“Milo Manara probably drew a butthole somewhere on there.” -Damn it, Adam Blackhat, don’t mix up our angry Spider-Woman with our angry ESA shirt feelings. It gets us all confused.

Speaking of angry shirt feelings, Brainmist outlined perfectly the problem we had with the shirt in the first place by breaking down a faulty “if he had cheeseburgers on his shirt would you feel like he was not respecting them?” argument piece by piece. Go read. It’s good stuff.

Excited for the Telltale Game of Thrones game? Adam Shang is skeptical. “It won’t be true to the books unless every conversion has a “murder” option.”

And finally, this thread in the Assassin’s Creed Unity glitch round-up is giving us life. 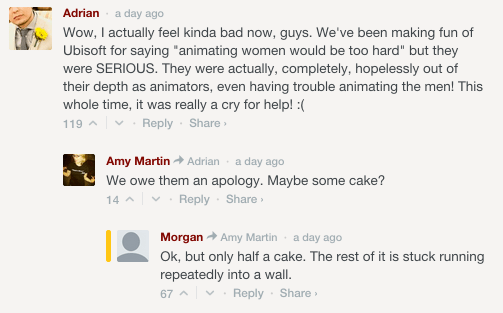 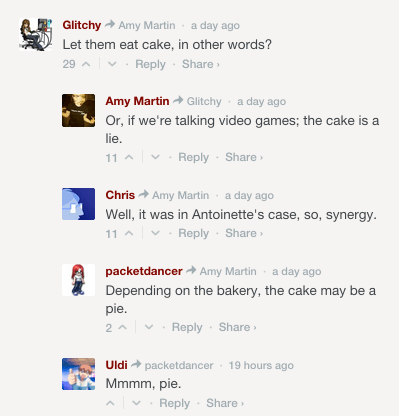 But wait! a pun variant! 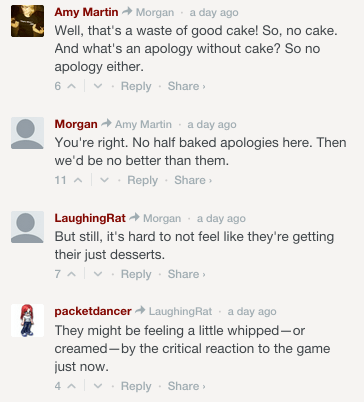 Good job, team. Half a cake for all of you.