No RT @yannisp This is the scientific head of operations for the ESA’s rosetta project. Cool shirt for an engineer :) pic.twitter.com/DvlzxylBHR

This is Matt Taylor, the lead project scientist of the European Space Agency’s Rosetta project—which, if you’ll remember, involves soft landing a space probe that’s been in orbit for 10 years onto the surface of a comet for the first time in history. He is, presumably, very intelligent. He is also wearing a shirt covered in cartoonishly sexy women. So. You know.

Here, have a gander at the full ensemble: 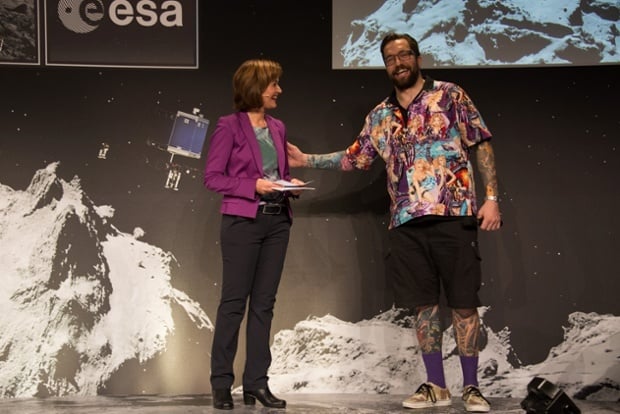 That is… a look. Specifically, it’s the “PG-13 rated version of Charlie Sheen’s signature look from Two and a Half Men” look. Seriously, he’s basically covered in pictures of that woman from the psychedelic drug-induced science fiction space western dream Kenny has in that one episode of South Park. You remember that episode! It was called “Major Boobage.”

Now, I could point out that one might be able to use this shirt as an example of how women in STEM fields might be made to feel indirectly uncomfortable in a male-dominated working environment despite no overt sexism or harassment being inflicted upon them. But I’m kind of too distracted by how tacky and outright terrible this shirt actually is. Like, seriously, dude. You wore that in public.

No no women are toooootally welcome in our community, just ask the dude in this shirt. https://t.co/r88QRzsqAm pic.twitter.com/XmhHKrNaq5