Family Circus Movie is Happening, Please Join Us in Praying for Death 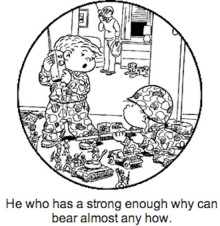 The Family Circus, a cartoon known mostly for loving Jesus a whole lot and making the antics of surprisingly large dog Marmaduke seem edgy for the last thousand years, is getting its own movie. Before you ask, no, there is probably nothing you can do to stop it. The thing has been in development for a while, and now has actual writers, God have mercy on their souls. I think we can call this the official time of death on Hollywood having any decent or original ideas. In the interest of cribbing from old ideas that are actually good, it’s time to take the whole industry out behind the barn and do the merciful thing. Why? Because Family Circus is the worst thing in the history of time. Not the worst newspaper strip. Not the worst work of art. The worst thing.

Here’s where we have a bigger problem with a Family Circus movie, than, for example, a Garfield movie. In Garfield, you have some conflict. Garfield wants to eat all the lasagna. Jon doesn’t want him to eat the lasagna. Then, Garfield finds a way to eat the lasagna. Conflict, tension, resolution. It’s not exactly King Lear, but it’s something you can build on.

Not so with Family Circus. The whole point of Family Circus is that there is no conflict. For those of you playing along at home, this is the same factor that makes it interminably boring and awful in every way. The Family Circus is basically a Ned Flanders wet dream, existing in a world where all babies are cute, all grandmas are biological machines for dispensing cookies and sage advice, the one minority character seen in five decades of publication has sprung from the ether so no one can say the strip is utterly monochromatic, and there are no problems that can’t be solved in a single line drawing and a sentence that edges up to cleverness but never actually touches it.

It’s not that Family Circus is unfunny. That’s a pretty venial sin as far as ideas for movie adaptations are concerned. No, our abiding problem with Family Circus, and the thing that gets our blood up about it to this day, is that nothing happens. Not only are there no jokes, there are barely things that make the effort of passing for jokes. There’s no “there” there.

This is a cartoon so dedicated to the principle of being uncontroversial that literally two things have happened in the more-than-50 years this dreck has been polluting funny pages all over the country. Mommy got a haircut in the ’90s, and the family bought a cellphone to acknowledge the 21st century several years after it arrived. That’s it. Like the glorified elevator music of Jack Johnson, Family Circus is offensive by its inoffensiveness. It’s the sort of pablum you can only gag on, and if there were any justice in the world, it would be stricken from our collective memory. Instead, it gets a movie, because of course it does.

So the next time the RIAA complains about piracy hurting movie revenues, let’s please all just remind them that they have this cinematic war crime in the works, so maybe the problem here is actually a little bit closer to home. Until then, if you must read Family Circus, please, read it with Nietzsche quotes appended to it. It’s the only worthwhile thing this cartoon ever did.

(via Variety and our worst nightmares, image courtesy of The Nietzsche Family Circus)