Room for One More? Mythbusters Prove Leonardo DiCaprio Could Fit On the Raft In Titanic 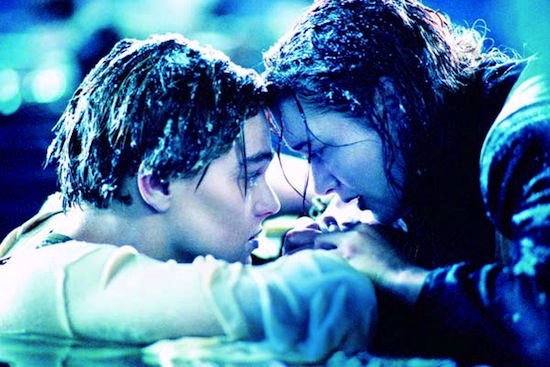 The ending of the movie Titanic has been a cinematic bone of contention for the ages. Relationships have been shattered and children disowned as a result of the senseless bickering between the two camps —  folks who take Cameron at his word that the wardrobe door could not have preserved the lives of both star-crossed lovers, and other people (yours truly included) who have always believed that there was pretty clearly room for two people, and the whole ending was a piece of idiocy that ruined an otherwise excellent film. Thanks to the Mythbusters crew, we can now shorten the title of the second camp — you can just refer to us as “the people who were right.” Want proof that both Jack and Rose could have lived to see another day, bet married, and probably grow sick of one another in due time? Let’s go to the tape.

In news that was no doubt met with several billion delighted shouts of “Ha! I told you so!” and an equal number of incredulous questionings of data, Adam Savage and Jaime Hyneman determined that Jack and Rose could have both survived on the floating platform at the end of Titanic with just one simple fix — attaching the life jacket Rose is wearing to the bottom of the board. Moving the life jacket off of Rose — who clearly doesn’t need it because she is not in the water — and spreading its buoyancy around the makeshift raft would have rendered the raft seaworthy enough to keep both lovers alive until they could be rescued.

If this were anywhere but the Internet, this would mean a cessation of discussion regarding the film’s ending. Since this is the Internet, though, infighting will continue, because the Internet runs off strongly held beliefs about inconsequential things and arguments in which there is now a real clear winner, and those things are like high-octane superfuel for the Internet, without which it would wither and die.

For many of us, though, it is time for a victory lap. I have complained about this ending to everyone who would listen and a few people who did their level best not to for the last 15 years, and I’m not alone. Granted, the solution is a little more creative than many of us had gotten in our explanations, but that just goes to show that if you are ever faced with a life threatening hypothermia scenario, your last few minutes on Earth would probably be better spent looking for engineering solutions to the problem of you dying instead of looking all moony-eyed at the girl you’re trying to save. That’s noble, yes, but it’s not entirely clever or pragmatic.

In other news, like a billion people owe me drinks over this. I’m happy to start collecting any time.