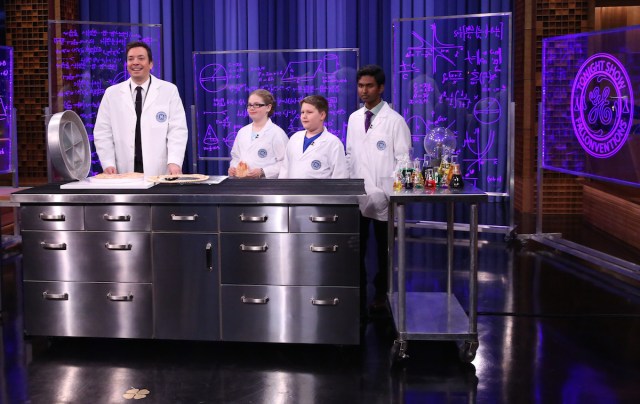 On last night’s Tonight Show Starring Jimmy Fallon they brought back the GE partnered segment “Fallonventions” where Jimmy showcases three young inventors, their creations, and then hooks them up with some scholarship money. We genuinely love it. See what the kids invented this time around.

First up is 10-year-old Jessica and her invention to make milk easier to pour, the EZ Moo Milk Dispenser. Jimmy also takes the chance to show off some of his own inventions.

15-year-old Suman presented his Steth IO invention, which improves on the stethoscope with a smartphone attachment and app.

The last invention solves the problem of pizza crust being too delicious, so 10-year-old Braeden invented the Pizza Decrustifier to take the crust off pizza. Poor misguided youth.

When I spoke to GE’s Global Marketing Director Linda Boff a few months ago she told me there were a few more “Fallonventions” segments in the works. This is one of them, but there should be at least one more soon. I hope they keep doing them. It’s nice to see kids interested in science and invention getting the spotlight (and some cash) from GE and The Tonight Show.