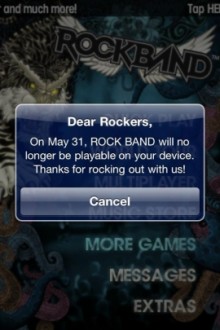 Yesterday, owners of Electronic Arts’ Rock Band for iOS booted up their favorite mobile music game and were greeted with the message seen to the left, stating that the game would be retired at the end of the month. No explanation as to why was given, nor was it made clear if the game could still be played in some offline fashion after the doomsday date. Word spread across the Internet, through various social networks and gaming blogs, but no one seemed to know exactly why the game was being shut down. Well, it turns out the game isn’t being shut down, and the message stating as much was simply sent out in error.

Yes, Rock Band iOS will live to see beyond May 31, 2012, and Electronic Arts claims the message was simply an error. In a statement sent over to CNET, they said:

“Rock Band for iOS will remain live – the in-app message users received yesterday was sent in error. We apologize for the confusion this caused. We’re working to clarify the issue that caused the error and will share additional information as soon as possible.”

Suspiciously, a message appeared in an EA FAQ that has since been taken down, which stated that EA was suspending support for Rock Band iOS in order to focus resources on other titles.

When the in-app message first began circulating, gamers were more dismayed that it didn’t clarify whether or not the game they legally purchased would still be playable offline, as Rock Band in general is largely built around offline play. Living in a world with a gaming industry where many games contain some sort of online support, it’s not uncommon for said online support to be shut down at some point in a game’s career. However, it’s pretty uncommon for a largely offline title to be rendered unplayable, which is what many gamers were interpreting the initial ambiguous message to mean.

Luckily, the game is fine, and will seem to live beyond this month. However, what is troubling is that not only was there an in-app message putting a countdown on the game’s demise, but a message on the aforementioned FAQ as well. It’s entirely possible that EA uses some kind of automated message creation system to generate doomsday messages, but having the message appear in the app, as well as on the FAQ, lessens the chances of a simple automation error.

Whatever the case, gamers can take solace in the fact that the message was an error, and their mobile music game of choice will carry on for now.