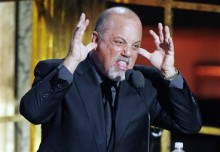 A lot of musicians over the years haven’t lent their music to video games. As time goes on and video games become more of a media mainstay, various musicians stopped being stubborn and realized lending their music to games only widens their potential audience. Well, video games claimed another musical soul in Billy Joel, who will be bringing ten hits to Rock Band 3 starting December 14th.

The fun thing about all this, aside from getting to play “Piano Man” on Rock Band 3’s keyboard peripheral, is that Billy Joel made the decision out of spite for Entertainment Weekly.

An excerpt from the USA Today article:

“I’ve never allowed my music to be used in a game before,” but an Entertainment Weekly review of NBC‘s The Office changed his mind.

Alluding to an episode in which characters mention a Rock Band featuring Billy Joel, “the critic wrote something like, ‘God forbid that ever should happen.’ So I called my people and said, ‘Get me (on) that Rock Band game.’ Then I wrote the critic, saying that every time I get a check, I’ll give him a little nod.”

For those curious, the tracks include “Captain Jack,” “It’s Still Rock N Roll to Me,” “Movin’ Out,” “Only the Good Die Young,” “Piano Man,” “Pressure,” “Say Goodbye to Hollywood,” “The Entertainer,” and “The Stranger.”

(USA Today via Kotaku; thanks Evan)