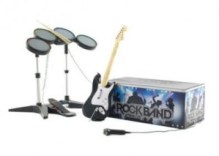 Viacom sold Guitar Hero and Rock Band creator Harmonix to investment group Columbus Nova for $49.99–a fraction of the price of one of their bundled Rock Band releases–All Things Digital reports. The $49.99 also includes music rights, as well as responsibility for unsold inventory.

The price may seem oddly low, but it’s more of a formality than anything, considering Columbus Nova took on all of Harmonix’s liabilities in the sale, and the deal was structured in such a way that Viacom makes about $150 million in tax benefits off the deal.

Even though Viacom was trying to rid itself of the renowned game developers (which is an odd thing to say) and ends up making back most of the money it spent when it bought Harmonix for $175 million in 2006, still, $49.99? Makes you wonder why some other big game developer didn’t snatch up Harmonix on a slight gamble, as Harmonix is most assuredly going to turn their poor Rock Band 3 sales right around with whatever their next innovative project ends up being.

(All Things Digital via Eurogamer)